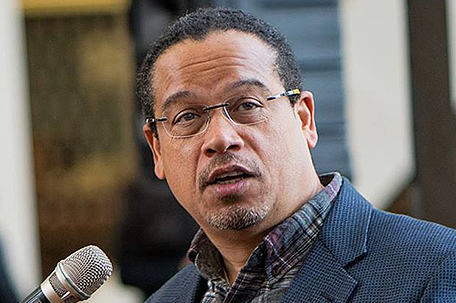 MINNEAPOLIS — Minnesota Rep. Keith Ellison on Sunday denied an allegation from an ex-girlfriend that he had once dragged her off a bed while screaming obscenities at her — an allegation that came just days before a Tuesday primary in which the congressman is among several Democrats running for state attorney general.

The allegation first surfaced Saturday night from Karen Monahan after her son alleged in a Facebook post that he had seen hundreds of angry text messages from Ellison, some threatening his mother. He also wrote he had viewed a video in which Ellison dragged Monahan off the bed by her feet. Monahan, a Minneapolis political organizer, said via Twitter that what her son posted was “true.”

Ellison denied the allegation of physical abuse. A spokesman for his campaign also denied the congressman had sent threatening text messages.

“Karen and I were in a long-term relationship which ended in 2016, and I still care deeply for her well-being,” Ellison said in a statement. “This video does not exist because I have never behaved in this way, and any characterization otherwise is false.”

Monahan had sent Twitter messages for several months referencing an unidentified, powerful man who had abused her. She had declined to share her story when contacted in recent weeks by The Associated Press, and she did not respond to a message late Saturday requesting copies of the texts and video.

Minnesota Public Radio News reported Sunday that it reviewed more than 100 text and Twitter messages between Ellison and Monahan that showed the two communicating over months after their breakup, including coordinating her getting her things from his house. MPR said the tenor was sometimes friendly, sometimes combative. MPR said in one message, Monahan told Ellison she planned to write about their “journey” and Ellison warned her not to, calling it a “horrible attack on my privacy, unreal.”

MPR said there was no evidence in the messages it reviewed of alleged physical abuse.

Ellison, who is divorced, is a six-term congressman and a leader within the Democratic Party. He became deputy chairman of the Democratic National Committee last year after falling just short of the top job. He announced this summer he would leave Congress after six terms representing the Minneapolis area and run for the state’s open attorney general’s office.

With a huge fundraising advantage and star power over his opponents — including a visit from Vermont Sen. and 2016 presidential candidate Bernie Sanders — Ellison was considered the heavy favorite heading into Tuesday’s primary.

Ellison’s Democratic opponents pounced on the allegations. State Rep. Debra Hilstrom circulated the initial Facebook post Saturday night, calling the allegations “troubling.” Tom Foley, a former county attorney, called on any video or messages to be turned over to law enforcement for an “immediate investigation.”