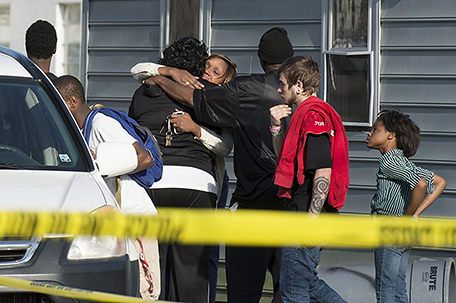 ABOVE PHOTO:  Onlookers gather outside of a house, where police say seven children and one adult have been found dead Monday, April 6, 2015, in Princess Anne, Md. Police were sent to the home Monday after being contacted by a concerned co-worker of the adult. (AP Photo/The Daily Times, Joe Lamberti)

PRINCESS ANNE, Md. — Utility regulators and police are trying to determine what could have been done to prevent the deaths of a man and his seven children who died of carbon monoxide poisoning from a generator installed after their home’s power had been disconnected.

Officials from Maryland’s public utility regulator say they are looking into what happened, while Princess Anne police have subpoenaed the power company to document exactly what steps it took and when.

Power company officials said they encourage residents who are having trouble paying their bills to contact them, but that Rodney Todd had not done so.

Todd, 36, and his children were poisoned in their sleep only days after the power company discovered a stolen meter and cut off electricity to their rental home, police said. Delmarva Power said it cut off power for safety reasons on March 25, not because the family was behind on its bills, as family members previously had said.

With the power out, Todd had bought the generator and put it in his kitchen to keep his two sons and five daughters warm. Friends and relatives last saw them alive March 28.

“Probably it was bedtime and they decided they needed some light and probably some heat, because toward the end of March even though it was spring we were having some pretty chilly nights,” Princess Anne police Chief Scott Keller said.

Police found their bodies Monday inside the one-story, wood-frame home on Maryland’s Eastern Shore after school workers, friends and the father’s co-workers knocked on the door with no answer.

“I’m just numb. Like it’s a nightmare but it’s not,” the children’s mother, Tyisha Luneice Chambers, told The Associated Press on Tuesday. “If I had known he was without electricity, I would have helped.”

She said relatives would meet Wednesday to plan their funerals.

Why Todd had a generator running indoors wasn’t clear. The chief speculated that if it had been outside, the noise would have bothered neighbors. He ruled out foul play.

Matt Likovich, a spokesman for Delmarva Power, said the utility was not contacted after the illegal meter was removed. “We had no record of who was living there,” Likovich said. “There was no way to determine what their situation was.”

Likovich said customers are encouraged to contact the utility if they are having difficulty paying their bill. He said there are options for such customers, including partnerships with social service agencies. But, he said, the customers “have to contact us.”

Todd had received assistance with utility bills in the past but did not apply for help this year, said Tom VanLandingham, who directs the Office of Home Energy Programs in Somerset County.

Although Todd received some welfare money, it wasn’t enough to pay the bills, his close friend Sarah Hardy said.

“How can a man survive off of basically minimum wage with seven kids, and you can’t help him with a utility bill?” Hardy said. “This man was working. And Delmarva Power cuts the lights off?”

Later Tuesday, the utility revealed that the rental home never had legal power while the Todds lived there. The utility said the electricity had been disconnected in October when the previous tenants moved out, and there was no request to reconnect it after the family moved there in November.

Bonnie Edwards said her grandsons, Cameron and ZhiHeem, were 13 and 7, and her granddaughters, Tyjuziana, Tykeria, Tynijuzia, TyNiah and Tybreyia, were 15, 12, 10, 9 and 6, respectively. Todd did all he could to stretch his money for their care, she said.

“All he was trying to do was to keep his kids warm,” she said.

Todd retained full custody when their divorce was finalized last September, and his ex-wife said he never harmed the children. But Chambers said he stabbed her in the face and served 16 months in prison for assaulting her.

Chambers also said she had been the primary breadwinner when they were together and kept paying child support until losing track of them in Todd’s last move.

“I was working 12-16 hours as a manager at McDonald’s, the overnight shift. He was home cooking and cleaning, and I was the working mom,” she said.

Learn about this home improvement that can save you money