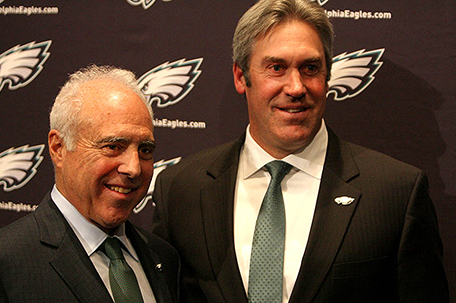 The Eagles began their transition from the Chip Kelly to the Doug Pederson era when they introduced him as their new head coach.

Even before his first practice at OTAs or even the ink was dry on his contract, some Birds fans were looking at the selection of Pederson with the kind of a disdainful side-eye that suggested that they’ve been down this road before.

Because Pederson was Andy Reid’s offensive coordinator in Kansas City, Eagles fans on social media were having flashbacks to Super Bowl XXXIX when the Birds offense moved with no urgency even though they were down 10 with about six minutes left in the game.

Those flashbacks weren’t triggered by Pederson’s presence on the podium with team Jeffrey Lurie on Tuesday.  It was Pederson’s last game as the offensive coordinator for the Chiefs that raised a few eye brows with a few “say-what’s” throw in for good measure.

Of course, Pederson was asked about that last Chiefs drive. And to his credit, Pederson answered the question which probably raised even more questions.

“It took us time because No. 1 we did not want to give Tom Brady the ball back. We knew we were going to score and we knew we had timeouts and the time,” Pederson said. “We were also limited with the number of receivers we had. Jeremy Maclin was out of the game.”

Yes, the Chiefs, who had three timeouts left, scored with just 1:13 left, but the onside kick failed and the Patriots ran out the clock.  If the Eagles get into a clock management situation during the 2016 season and they lose, you will see this conversation again.

Meanwhile, it should be noted that Pederson did call plays in the second half of games during the Chiefs 11-game winning streak that got them into the playoffs.

And also remember that Pederson did help Alex Smith become better quarterback after he was discarded by the San Francisco 49ers.  In fact, the former Utah star had his best year as a pro.

Smith passed for a career-high 3,486 yards and had a career-high 498 yards running the football. He threw 20 touchdown passes. Smith went through a streak where threw 312 passes without an interception while leading the Chiefs on an 11-game winning streak that put the Kansas City into the playoffs.

Smith said he thinks Eagles starting quarterback Sam Bradford, who will become a free agent in March, is a good fit for the offense, probably something resembling the West coast offense.  Bradford passed for 3.725 yards with 19 touchdown passes and 14 interceptions.

“I think Sam’s a quality quarterback. I think he’s a top notch quarterback,” Pederson said. “Look at what he did the last half of the season, the numbers he was able to put up, I feel like he’s a quarterback that would fit perfectly into the system that I’m going to bring.”

You would think Pederson as the head coach would also bode well for running back DeMarco Murray. In Kansas City, Jamaal Charles and the running game thrived under Pederson and Reid. Charles gained over thousand yards in 2013 and 2014.

Pederson said he thinks that Murray is also good fit for his offense in the way that Charles did with the Chiefs.

“I think there’s a unique style with him. When you look at his tape in Dallas, I think there’s some great opportunities with him. He’s more of a downhill guy, a physical running back,” Pederson said.