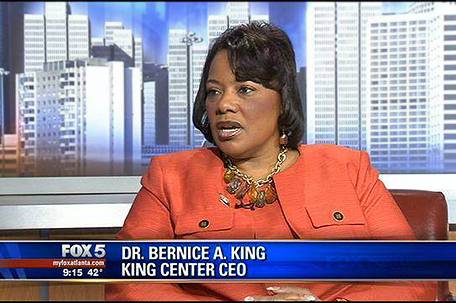 How low can you go? Dr. Bernice King had the unfortunate experience of seeing her idolized father’s, Dr. Martin Luther King Jr., face superimposed on the image of a street hood sporting a huge gold chain and making a gang sign gestures under the party headline “Freedom to Twerk.” The fliers, which had been distributed widely, were promoting a January 18th Flint, Mich., teen club’s twerk party, according to My Fox Atlanta.

Dr. King, who spoke to Fox 5’s Deidra Dukes, was appalled and saddened by the fact that her father’s memory could be so blatantly disrespected, “I feel like we have failed to reach these [groups]. This imagery thing is just appalling, and it’s almost embarrassing,” Dr. King stated.

“For me, as his daughter, it’s like wow. I lost a father who sacrificed everything for them to live a much more dignified and respectful life, and for it to come to this makes me sad.”

What totally threw Dr. King off guard was the fact that these promoters would even fathom using her father’s image for an event he would never have condoned, “My father would have worked to elevate them, to connect with them, and bring them in to the movement,” Dr. King concluded.

When My Fox tracked down one of the event’s promoters, the unidentified man told the news outlet they meant “no disrespect” with regards to the controversial flyer or party. The man went on to claim that the teens associated with the dace party wanted to impact the community in a positive way and reach out to those who are surrounded by street violence. He also said that the flyer was a way to reach the masses via “gospel rap” and that its message was certainly not a negative one.

Reportedly, the venue’s owner, Vic McEwen, did not know that the party would be promoted using an enhanced image of the slain civil rights leader. When McEwen saw the flyer, he reportedly cancelled the event.

Bernice King to step down as New Birth elder