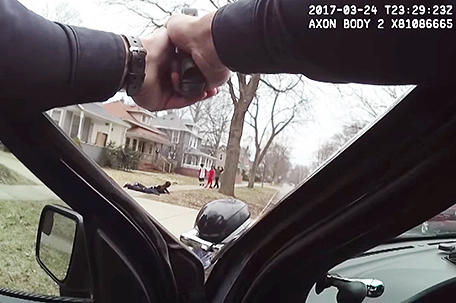 Grand Rapids, MI — Outraged community leaders in Grand Rapids are demanding reform after five African- American youths, aged between 12 and 14 years, were held at gunpoint — for no justifiable reason — as they walked home from playing basketball. Pressure on the department by The Grand Rapids Press through a Freedom of Information Act request finally forced them to release the body camera footage which is nothing short of horrifying.

As the Free Thought Project reported last week, original video of the incident, taken from far away, shows a number of Grand Rapids Police Department patrol cars descend on the scene, as officers point loaded weapons at the youths, order them to the ground, and eventually place them each in handcuffs — after a vague call to dispatch suggested a large fight in the area, and the possibility a teen was in possession of a gun.

None of the young teens in question were armed.

“Now they’re saying they don’t like the police,” Ikeshia Quinn, mother of two of the teens, told WOOD-TV — intimating the boys did not feel ambivalent toward law enforcement until this traumatic incident. “They don’t want to be involved with the police. They should’ve been approached differently because they are young boys. They had basketballs in their hands.”

As the body camera footage begins, Officer Caleb Johnson pulls up to the boys and immediately points his weapon at them and demands they get on the ground.

“Get on the ground!” Johnson tells the boys.

Three of the children were so confused that they did not immediately comply. Luckily they weren’t shot.

“Hey, get over here,” Johnson said, motioning with his arm. “Keep your hands where I can see them and get on the ground.”

“Can you please put the gun down?” one of the boys asked.

Another youth is heard saying, “I do not want to die, bro.”

“We are not about to die we didn’t do nothing,” another of the boys says to try and comfort him.

“Don’t shoot me,” one of the boys pleads with the officers.

The entire time, the boys are trying to explain to the police that they were not involved in any of this mess and they have the video to prove it.

“Calm down, calm down, it’ll be alright,” Officer Johnson says as he has his finger on the trigger of his police issued pistol as its trained on the boys. “They’ll give you directions, OK?”

As more officers arrived, the boys were instructed to stand up, put their hands on their heads, and walk backward slowly toward the car. They were then all placed in handcuffs while officers figured out they were assaulted with deadly weapons for the sole act of being in the wrong place at the wrong time.

After being wrongly detained for 10 minutes, the officers then called the boys’ parents to come pick them up. When the parents got there, naturally they were shaken up and furious to find out their children had been held at gunpoint because police mistook them for criminals.

“I’m sorry, I don’t mean no disrespect, but you all have to understand that’s my baby,” said Shawndryka Moore, mother of one of the boys, crying as she stood outside of the police cruiser with her son inside, as reported by mLive. “We don’t deal with police. I don’t have charges. We don’t do this. All this stuff that goes on in this world – I worry about my kids every day. That’s why I don’t let them go nowhere.”