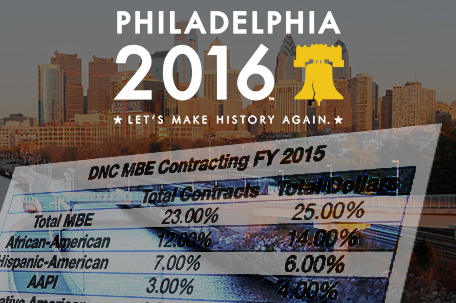 WASHINGTON – The Democratic National Committee today released updated statistics on the diversity of its hiring and contracting, part of the DNC’s commitment to ensuring that its staff reflects the great variety of perspectives, backgrounds and experiences that make up our party and our country.

The new statistics show that the party continues to improve on its hiring of a diverse workforce and that it continues to lead by example among political party committees.  The statistics show that 48 percent of all DNC employees were women and 35.9 percent were people of color in the last year. Specifically, 18.9 percent were African American, 7.7 percent were Hispanic-American, 8.1 percent were Asian-American or Pacific Islander, and 1.2 percent were Native American. The statistics also reflect that approximately two-thirds of the Democratic National Committee’s senior staff – including the Communications Director, Political Director, Director of Community Engagement, Director of the Chair’s office, Director of the Secretary’s office, Director of Delegate Selection, Director of the Association of Democratic State Parties, Director of Voter Expansion, Director of Marketing, Chief Diversity Officer, CEO of the Convention, and Senior Advisor on General Election Strategies – are persons of color, and more than half are women, a significant and unprecedented achievement for a national party. While this is a snapshot of the current staffing levels of the DNC, we continue to focus on broadening our reach and expanding on our diversity numbers. Our work is never finished.

Furthermore, in order to seek out diverse business owners and talent, the Party has developed a directory of diverse suppliers and vendors registered to do business with the DNC and its fellow political party committees. Currently, over 500 businesses are part of that directory. In 2015, 23 percent of DNC contracts and 25 percent of the total dollars spent by the DNC this past year have gone to minority-owned businesses and enterprises (MBEs).

The Democratic National Convention Committee (DNCC) also has developed a similar directory for companies looking to do business with the Convention, and currently, the Convention has awarded four out of five contracts so far to minority-owned firms.

The DNC’s success in its diversity program extends in part on the Party’s creation of a Chief Diversity Officer position in 2011. That role has been responsible for developing a pipeline of talent that is helping the DNC and other Democratic Party committees identify talent across every relevant field in political campaign operations. The Chief Diversity Officer has also fostered relationships and mechanisms to communicate with congressional caucuses, like the Hispanic, Black, and Asian Pacific American Caucuses, to better reach qualified candidates with job posting information and help them connect to the hiring process. Similarly, the party has aggressively engaged diverse audiences through its Political and Communications teams, ensuring that African-Americans, Hispanic-Americans, women, Asian-Americans and Pacific Islanders, LGBT Americans, and Native Americans are all included in our outreach.

The DNC’s commitment to diversity stands in stark contrast to the Republican Party, which acknowledged in an autopsy report on their losses in 2012 that the GOP was seen as out of touch and needed to be more inclusive. Instead, the RNC has stood by while its presidential candidates have torn up that report. GOP frontrunner Donald Trump called Mexican immigrants “rapists” and called for banning all Muslims from entering the United States, Marco Rubio compared Muslims to “members of the Nazi party” and said that we should consider closing down Mosques and cafes where Muslim Americans gather, and Ted Cruz said he “understands” Trump’s Muslim ban, said that Muslim neighborhoods in our country should be patrolled, and would deport millions of people as soon as he enters the White House.

This substantial growth in diversity hiring and contracting has occurred under the direction of Chairwoman Debbie Wasserman Schultz, who began her role at the DNC in 2011. In 2012, she set the first-ever diversity goals for the Democratic National Committee’s Convention in Charlotte, which were met and exceeded, and the 2016 Convention is on track to supersede those goals, with a minority contracting target of 35 percent while also including new certifications for LGBT-owned businesses.

“A commitment to diversity takes more than words on paper; it takes a concerted effort to expand outreach and engage diverse communities at every level. Democrats fundamentally believe in the American promise that everyone, regardless of who they are or what their last name is, should have a fair shot at the American Dream, and I am proud of the Democratic Party’s diversity goals and achievements. Despite the RNC’s much touted autopsy report following the 2012 elections, the Republican presidential candidates have shunned inclusiveness, instead embracing the GOP’s most divisive campaign tactics and increasingly ugly and offensive rhetoric. Diversity is the definition of the American experience, and if the Republican Party continues to alienate and divide, it should expect to continue to lose the White House for generations to come.” – DNC Chair Rep. Debbie Wasserman Schultz

WGAW Releases 2015 Diversity Report: In short, it’s not getting any better