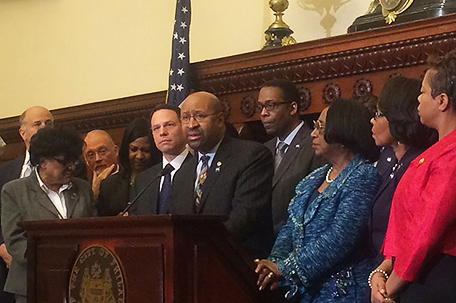 ABOVE PHOTO:  Mayor Michael Nutter announcing the choice of Philadelphia for the 2016 Democratic National Convention. — at Philadelphia City Hall.  (Photo by Denise Clay)

“I am thrilled to announce that Philadelphia will host the convention where we will nominate the 45th President of the United States,” Wasserman Schultz said. “In addition to their commitment to a seamless and safe convention, Philadelphia’s deep rooted place in American history provides a perfect setting for this special gathering. I cannot wait to join Democrats across the country to celebrate our shared values, lay out a Democratic vision for the future, and support our nominee.”

The DNC’s Technical Advisory Group evaluated cities across the country, looking at factors such as hotel capacity, transportation, security, financing and logistics.

“The City of Philadelphia is excited and honored to be selected as the host city for the 2016 Democratic National Convention,” Philadelphia Mayor Michael A. Nutter said. “We believe that it was our proven track record of hosting big events safely and efficiently with a dynamic team of top-tier professionals to organize and manage a conference of this magnitude, paired with our City’s tremendous amenities, its accessible location and historical significance, which made Philadelphia the ideal choice for the 2016 DNC.  I want to thank our great team at PHL DNC 2016, Gov. Rendell and Governor Wolf, Senator Casey, Congressman Brady, Congressman Fattah, and former Congresswoman Schwartz.  I especially want to acknowledge our great partners in the Labor unions, business and political communities, clergy and our citizens, who are eager to see Philadelphia on the national stage as the host city.  We’re all delighted to make history again, here in the City of Brotherly Love and Sisterly Affection.”

Additional details on the convention structure, host committee, and staff, will be made available in the coming weeks.

“Whether our world-class art collections, award-winning restaurants, or innovative public spaces and parks, the City of Philadelphia has everything needed to guarantee a lively and memorable experience for conventioneers. Our historical sites, which include Independence Mall and our own City Hall, inspire awe for our wonderful democracy among visitors from every state and around the world.

“Winning the convention took a bipartisan and collaborative effort. We congratulate the Philadelphia 2016 Committee — led by former Governor Rendell, Congressman Brady, Mayor Nutter, Senator Casey, former Congresswoman Schwartz, and our own Councilwoman Marian Tasco — for making the case for our great city. Kevin Washo and his team, which laid the groundwork with trademark Philly hustle, deserve kudos as well.

“We are a city that is too often underestimated and that too often underestimates itself. To our restaurants, merchants, hospitality workers, subway conductors, public employees, and all others who make the City of Brotherly Love and Sisterly Affection run every day, we say: Get ready to show the world what Philly can do.”