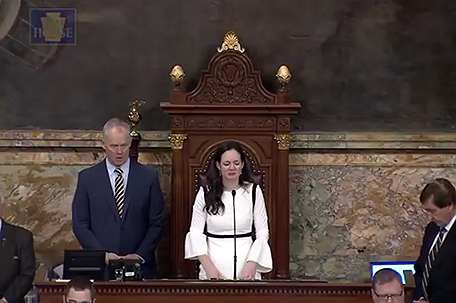 The opening prayer is often the least controversial part of the Pennsylvania House of Representatives’ ceremonial routine on a session day, but Monday’s prayer was different.

On the same day that the House swore in its first Muslim women member Rep. Movita Johnson-Harrell, (D-Philadelphia,) freshman Rep. Stephanie Borowicz, (R-Clinton County,) stepped to the House rostrum to offer a heartfelt prayer proclaiming her Christian beliefs and how the nation has forgotten Jesus and asking for forgiveness.

“Jesus, you are our only hope,” she said, before going on to pray for the House Republican leaders, Gov. Tom Wolf, and President Trump and for the president’s standing unequivocally beside Israel. But it wasn’t until the ending of her prayer when House Speaker Mike Turzai, (R-Allegheny County), appeared to reach out to seemingly cut her off.

“At the name of Jesus, every knee will bow and every tongue will confess Jesus, that you are Lord,” she said.

The prayer drew ire from House Minority Whip Jordan Harris, (D-Philadelphia), who accused Borowicz of weaponizing her religion to “intimidate, demean and degrade” the newly installed Muslim representative in front of her family, friends and guests who gathered to witness her take the oath of office.

“Let me be clear. I am a Christian. I spend my Sunday mornings in church worshiping and being thankful for all that I have,” Harris said in a statement. “But in no way does that mean I would flaunt my religion at those who worship differently than I do. There is no room in our Capitol building for actions such as this, and it’s incredibly disappointing that today’s opening prayer was so divisive.”

At the end of the session day, House Democratic Leader Frank Dermody of Allegheny County expressed his displeasure on the House floor about the prayer that quietly disturbed other members on both sides of the aisle. Saying for the 28 years he has served in the House, Dermody said he found the opening prayer represented a time where members paused to be inspired and united.

Turzai interrupted Dermody, admonishing him about ascribing motive to a member’s words. Dermody replied he was speaking about her words, not Borowicz herself.

An attempt to reach Borowicz after Monday’s session ended was unsuccessful.

He called on Turzai to appoint a committee to establish guidelines for the opening prayers.

Turzai shared that when the House formerly allows clergy to offer the prayer, they were asked to craft a prayer that was respectful of all religious beliefs, but that those instructions had not been submitted to House members offering prayer.

He reminded that the House currently is involved in a pending federal lawsuit over its refusal to allow nontheists — those who do not believe in a supreme deity — to be given the opportunity to offer an opening invocation at the start of House sessions. As a result, the House relies on its own members to offer the opening prayer on session days while the case is on appeal.