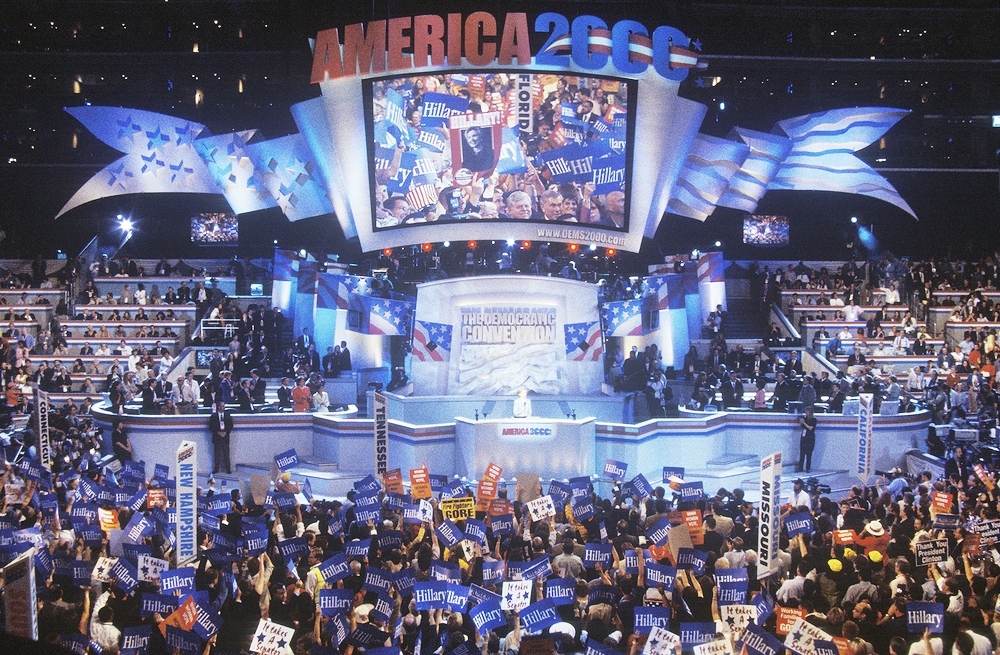 ABOVE PHOTO:  Scene at the 2000 Democratic National Convention   (spirit of america / Shutterstock.com)

National Democratic campaign committees have spent more than $500 million on consultants over the past two elections, but less than 2 percent of it has gone to firms that are run at least in part by racial minorities.

That’s the key finding of a new study conducted by PowerPAC+, which seeks to promote minority voices within the Democratic Party.

The PAC reviewed Federal Election Commission filings from the 2010 and 2012 elections and found just $8.7 million of the nearly $514 million in consultant contracts paid by the three big Democratic campaign committees went to Minority Business Enterprises (MBE), which it defined as having at least one minority as an owner or principal.

That accounts for less than 5 percent of the firms they hired.

And of the 13 firms, only four received contracts that exceeded $1 million.

The lack of diversity in the ranks of the Democratic Party’s paid consultants is not a new issue.

Earlier this year, Democratic National Committee vice chairwoman Donna Brazille, one of the leading African-American political consultants in the country, compared the consultant game to a “racket” in which minority-run firms are not being included.

Brazille told The Fix that the new study is “the most disturbing report I have read on diversity and inclusion in a long time.”

“This report is a serious wake up call that the party and its vendors must redouble their efforts to recruit, expand and extend opportunities to all, including its strongest supporters,” Brazille said. “At our upcoming meeting in the fall, I expect the Democratic Party will provide us with an explanation on how to correct this problem before the election.”

Rep. Marcia Fudge (D-Ohio), the chairwoman of the Congressional Black Caucus, has also pushed the DCCC to consult with more minority-run firms.

The committees have assured the critics that this is a point of emphasis for them, and Fudge told Politico that she has seen improvement, particularly at the DNC.

In announcing the new numbers, PowerPAC+ notes that while the Democratic Party has so few Democratic consultants, minority votes accounted for 44 percent of President Obama’s vote totals in 2012.

It acknowledged the party has made progress, but says that the numbers are still falling far short of where they should be a half-century after the Mississippi Freedom Democratic Party challenged that state’s all-white delegation to the Democratic National Convention.

“…It is deeply disappointing that we are even having this conversation in 2014, 50 years after Fannie Lou Hamer challenged the party and the nation, 30 years after the Rainbow Coalition raised all of these same issues, and six years after the election of America’s first African American president,” the report states. “If people of color are smart and talented enough that one of them can serve as leader of the free world, then they are certainly smart and talented enough to run political campaigns for Congress, Senate, and the White House.”

“Drawing on the diversity in our party to hire the most qualified experts is critical to our success,” Barasky said. “This cycle, the DSCC has significantly expanded our outreach to diversify campaign staff and field operations in targeted states and look to continually improve on our diversity.”

The DCCC said it is making similar progress.

“The DCCC takes these goals seriously, and we have hired our first-ever diversity director and a national training director to share our job opportunities with diverse communities across the country, as well as worked with the CBC and (Congressional Hispanic Caucus) to identify minority-owned vendors,” DCCC spokeswoman Emily Bittner said.