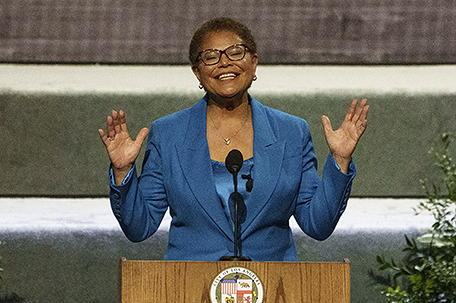 LOS ANGELES — Karen Ruth Bass, a former physician assistant who shattered glass ceilings with her rise to a leadership post in the California legislature and later a prominent spot in Congress, took a ceremonial oath of office last Sunday as mayor of Los Angeles. A progressive Democrat, Bass becomes the first woman and second Black person to hold the city’s top job and will formally assume her duties Monday amid multiple crises in the nation’s second most populous city.

She was sworn in ceremonially by Vice President Kamala Harris, a longtime friend and former California attorney general. The formal oath was administered privately by the city clerk. Bass will be tasked with easing rising crime rates, restoring trust in a City Hall shaken by racism and corruption scandals, and addressing the issue of over 40,000 people living in trash-strewn encampments or rusty RVs that have spread into virtually every neighborhood.

Striking a tone of unity, Bass said the many, disparate arms of government must come together to confront homelessness.

To move in a new direction “we must have a single strategy” that brings together government, the private sector, and other stakeholders,” Bass said, speaking in a downtown theater near City Hall.

She said if people link arms rather than point fingers, lives will be saved. She called that “my mission” as mayor.

She also urged residents to become involved in city government, echoing John F. Kennedy’s presidential inaugural address in which he said, “Ask not what your country can do for you –- ask what you can do for your country.”

“I call on the people of our city to not just dream of the L.A. we want, but to participate in making the dream come true,” Bass said.

Bass — who was on President-elect Joe Biden’s short list for vice president — claimed the post last month after overcoming more than $100 million in spending by rival Rick Caruso, a billionaire developer and Republican-turned-Democrat who campaigned as a centrist and promised a strong emphasis on public safety.

Caruso would have represented a turn to the political right for the heavily Democratic city. Bass swayed voters by arguing she would be a coalition builder to help heal a troubled city of nearly 4 million.

“We are going to build a new Los Angeles,” Bass had promised at an election night rally.

A marquee outside the theater featured a photo of a beaming Bass with the slogan “A new day for Los Angeles.” The backdrop for the stage, topped by U.S flags, was an oversized shot of the steps and columns of City Hall.

In a surprise appearance, Stevie Wonder got the crowd dancing, playing “Living for the City.” He and Bass shared a hug. Bass, 69, ran as the consensus pick of the Democratic establishment and was endorsed by Biden, former President Barack Obama and former first lady and Secretary of State Hillary Clinton.

Despite her close ties with the Democratic political community, she has described herself as a change agent who plans to declare a state of emergency on her first day in office to deal with homelessness. She has signaled she will seek to marshal “all of the resources, all of the skills, the knowledge, the talent of the city” to get homeless people into housing.

Details on the emergency order have yet to emerge, though she has said she intends to get over 17,000 homeless people into housing in her first year through a mix of interim and permanent facilities.

She also will contend with entrenched urban problems that include a housing shortage, crumbling streets and some of the nation’s worst traffic.

“The mayor’s first priority and likely the main one for some time to come is homelessness,” said Raphael Sonenshein, executive director of the Pat Brown Institute for Public Affairs at California State University, Los Angeles.

“The voters don’t expect a miracle but will be looking for a clear and credible path toward measurable and visible improvement,” Sonenshein said. “It’s an opportunity for an energetic reset on a crisis that has seemed stuck, and also a chance to restore confidence in local government in Los Angeles.” She replaces beleaguered Democrat Eric Garcetti, who ends two bumpy terms with his nomination to become U.S. ambassador to India stalled in the Senate, apparently over sexual misconduct allegations against a former top Garcetti adviser.

Bass takes office as the City Council contends with a racism scandal that led to the resignation of its former president and a powerful labor leader, while one councilman snared in the scandal has resisted calls to resign. Meanwhile, three current or former council members have been indicted or have pleaded guilty to corruption charges.

Bass made history in the state Assembly by becoming the first Black woman to serve as speaker of any state legislature. She also served as chair of the Congressional Black Caucus in 2019 and 2020.