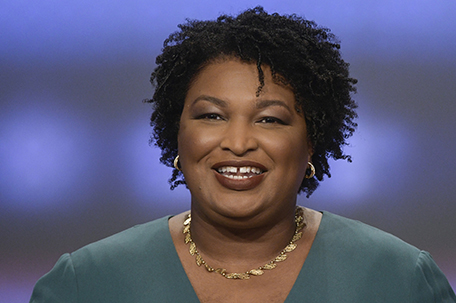 ATLANTA — Stacey Abrams’ Democratic campaign filed a federal lawsuit Sunday asking a judge to delay vote certifications in Georgia unsettled governor’s race by one day and to make officials count any votes that were wrongly rejected.

If successful, the suit would prevent officials from certifying county vote totals until Wednesday and could restore at least 1,095 votes that weren’t counted. The campaign said thousands more ballots could be affected.

Republican Brian Kemp’s campaign didn’t have any immediate comment on the lawsuit, filed over alleged problems in populous Gwinnett and DeKalb counties in metro Atlanta. But Kemp aides previously said Abrams has no path to victory and called her refusal to concede a “disgrace to democracy.”

Abrams’ campaign manager, Lauren Groh-Wargo, said the state’s numbers can’t be trusted and that 5,000 votes came in Saturday that previously were unknown.

“This race is not over,” she said on a conference call with reporters. “It’s still too close to call.”

Abrams hopes to become the nation’s first black woman elected governor, while Kemp is trying to maintain GOP dominance in a diversifying state that could be important in the presidential election in two years.

The campaigns disagree how many votes remain to be counted. But no matter which side is right, it’s clear Abrams is trailing and only a limited number of ballots are left to close the gap.

“So her margin in those uncounted votes needs to be really high,” Jeffrey Lazarus, who teaches political science at Georgia State University, said Sunday in an interview conducted by email. “To put it simply, she’s running out of votes.”

The Associated Press has not declared a winner. AP will reassess the race Tuesday, the deadline for counties to certify election results to the state.

Unofficial returns show Kemp with 50.3 percent of nearly 4 million total ballots, or a 58,875-vote margin over Abrams that has narrowed slightly as votes were counted. Libertarian Ted Metz received about 37,000 votes in the three-way contest.

Kemp’s lead is enough for an outright victory if totals remain the same, but it’s a tight race considering the large, 61 percent turnout.

Abrams campaign leaders said she needs to get the margin down to about 22,000 votes to force a runoff, and they sent a fundraising email to supporters Sunday saying at least 30,823 votes remain to be counted.

“That said, I think the Abrams campaign still faces an uphill battle in first convincing a court about the need for a recount and second, having the recount net enough votes to force a runoff. As a general matter, recounts rarely end up changing the outcomes of elections,” Kang, who previously taught at Emory University in Atlanta, said in an email interview.

Each of Georgia’s 159 counties must certify final returns by Tuesday, and many have done so already. The state must certify a statewide result by Nov. 20.

Audrey Haynes, a political scientist at the University of Georgia, said Kemp’s best move is to let the process play out.

“The bottom line is that if the votes are there, they are there. If not, then there is less recourse for continued delay. But if he acts to limit the ability to fully determine that question, then there will be a bit of a cloud not only hanging over him, but the state as well,” she said by email.