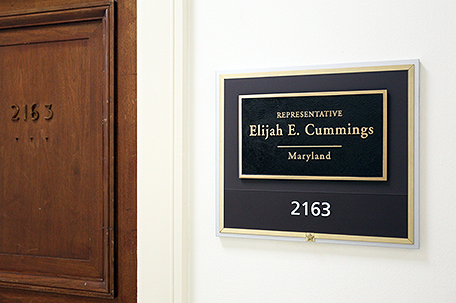 BALTIMORE — Voters in the congressional district that U.S. Rep. Elijah Cummings represented until his death earlier this month will elect his replacement in a special election announced Monday.

Maryland Gov. Larry Hogan set the special primary election for Feb. 4 and the special general election for April 28. The latter will coincide with the state’s previously scheduled spring primary, a move that Hogan’s office said will avoid the cost and confusion of an additional election.

“It is imperative for the 7th Congressional District to have a strong voice in the House of Representatives, and today we are ensuring the process to fill this historic Maryland seat moves forward in a fair and timely manner,” Hogan said in a statement. “We have chosen the dates for this important special election to allow for a robust campaign.”

The majority-black district includes parts of Baltimore and portions of Howard and Baltimore counties. Although some parts face entrenched poverty and violent crime, the district also includes affluent areas and famous landmarks such as Johns Hopkins University and its hospital, the Social Security Administration, and the Centers for Medicare and Medicaid Services.

Other areas of Baltimore are represented by two Democrats: Reps. John Sarbanes and Dutch Ruppersberger. Statewide, Democrats outnumber Republicans 2 to 1.

The governor’s office says Hogan went beyond the minimum days allowed by law to give the State Board of Elections more time to be ready and to make sure military members serving abroad can receive and return their ballots in time.

Interested candidates can file required paperwork Wednesday through Nov. 20. They must be at least 25 years old and reside in Maryland, but not necessarily within the district.

Cummings’ career spanned decades in Maryland politics. He rose through the ranks of the Maryland House of Delegates before winning his congressional seat in a special election to replace Kweisi Mfume, who left to lead the NAACP. He was reelected in 2018 with 76% percent of the vote.