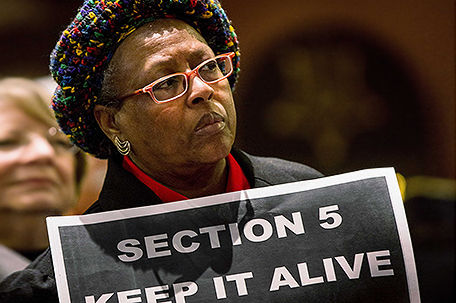 WASHINGTON — The Supreme Court wrestled Wednesday with a dispute over the use of race to redraw political districts that turns the usual arguments on their heads.

The complicated case argued at the high court involves the use of a landmark voting rights law that led to the election of African-Americans across the South and Supreme Court decisions that limited the use of race to draw electoral maps.

Only in this case, Republicans in Alabama are invoking the Voting Rights Act to justify concentrating black voters in some legislative districts, and African Americans challenging the state’s legislative maps said the GOP relied too heavily on race.

“Do you realize you are making the argument that the opponents of black plaintiffs used to make here?” Justice Antonin Scalia asked a lawyer for the challengers. Scalia appeared favorable to the state’s argument.

Justice Stephen Breyer was more skeptical of the state’s claims, but he too found the role reversal curious. “This is an obverse and odd situation,” Breyer told Alabama Solicitor General Andrew Brasher.

The outcome could come down to whether the justices think that race was the motivating factor in the state’s 2012 redistricting or that Republicans merely tried to maximize their partisan advantage.

The Supreme Court looks skeptically on political districts that are drawn primarily on the basis of race, and is much more forgiving of drawing maps for partisan reasons.

There is no doubt about the partisan trend in Alabama. Republicans won control of the Alabama legislature in 2010 for the first time since Reconstruction, then consolidated their gains when they drew new electoral maps following the 2010 census.

In last week’s elections, the once-powerful Democrats won just eight seats in the state Senate, all of them from districts in which African-Americans are a majority.

Lawsuits challenging the new maps say the GOP misused the voting-rights law by concentrating black voters in some districts and, as a result, making neighboring areas more white and more likely to elect Republicans.

Both sides agree that Republicans would have violated the law if they had reduced the black population too much in black-majority districts.

Chief Justice John Roberts questioned whether it’s fair to require the state “to hit the sweet spot between the two extremes.”

But Justice Elena Kagan said that the precision with which Alabama moved thousands of black voters into districts that already had a majority of African Americans made race seem the key point in the line-drawing.

“The numbers speak for themselves,” Kagan said.

A decision is expected by late June.

N.C. court to decide the fate of voting rights for Blacks