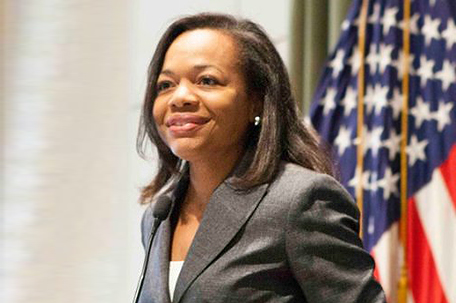 ABOVE PHOTO:  Kristen Clarke, President and executive director of the lawyers’ Committee for Civil Rights Under Law.

Opponents vow to continue the fight.

Voting rights advocates are prepared to keep battling Texas’ discriminatory voter ID law all the way to the U.S. Supreme Court if necessary.

That pledge came after the 5th U.S. Circuit Court of Appeals reversed a lower court’s decision to block Texas from enacting its revised voter identification measure last Friday. In a 2-1 decision, the appeals court authorized the state to enforce its strict ID requirements for the midterm elections.

“We are weighing our options in our long-standing battle with Texas over its discriminatory voter ID law. Voter suppression laws should have no place in our democracy today,” said Kristen Clarke, president and executive director of Lawyers’ Committee for Civil Rights Under Law, in a tweet on Saturday.

Voter ID laws are part of the long history of voter suppression in the United States. More than 34 states passed restrictive voting laws since 2010, and 14 of them came into effect for the 2016 election, according to The Brookings Institution.

The appeals court had previously found Texas’ original voter ID law discriminatory and sent the case back to the U.S. District Court. After Texas legislators revised the law, the lower court judge ruled in August that it was still racially discriminatory.

However, the three-judge panel disagreed last Friday. Cosmetic changes, such as a grace period extension for the use of expired photo IDs and adding mobile locations to obtain election certificates, were enough to persuade the two conservatives on the appeals bench.

“For years, the Justice Department sided with civil rights groups in arguing that Texas Voter ID law was discriminatory,” Clarke tweeted. “Under [Attorney General Jeff] Sessions, they switched sides. At every turn, AG Jeff Sessions continues to gut the civil rights mission of our nation’s most important federal agency.”