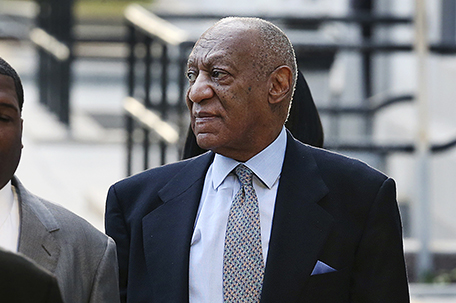 ABOVE PHOTO:  Bill Cosby, right, arrives for a hearing in his sexual assault case at the Montgomery County Courthouse on Tuesday, Nov. 1, 2016, in Norristown, Pa. Prosecutors at the pretrial hearing on Tuesday will ask the judge to let the other accusers testify to show Cosby drugged and molested young women in a “signature” fashion.  (AP Photo/Mel Evans)

NORRISTOWN, Pa. — Bill Cosby returned to court Wednesday for a hearing to decide whether a judge will allow damaging decade-old testimony from an accuser’s lawsuit to be used at his June sexual assault trial.

Cosby’s lawyers have said the comedian agreed to answer questions under oath only after being assured he would not be charged with a crime. The defense has insisted Cosby had an oral promise from the district attorney at the time that he would not be prosecuted over a 2005 sexual encounter with Andrea Constand, a former Temple University basketball manager.

The judge previously refused to dismiss the charges on those grounds but is now being asked to suppress the deposition when the case goes to trial. A hearing on the issue began Tuesday and resumed Wednesday.

A new district attorney had Cosby arrested last year, after the deposition was unsealed and dozens of new accusers came forward.

Cosby, now 79 and blind, has said his encounter with Constand was consensual. He could get 10 years in prison if convicted. He is free on $1 million bail.

Judge Steven O’Neill, who is presiding over the case, said Tuesday that Cosby’s decision to testify could have been strategic. He found no evidence Cosby’s lawyers tried to get the promise in writing before allowing him to give four days of testimony.

They might have thought it was better for him to testify than plead the Fifth Amendment and have a civil jury think he had something to hide, the judge suggested.

Defense attorney Brian McMonagle said the judge would set a bad precedent if he let the testimony in.

“I don’t want DAs making promises that they don’t later keep,” McMonagle said. “That strikes at the heart of fundamental unfairness.”

It’s not clear when the judge will rule.

Cosby, a long-married comedian once known as America’s Dad for his role on the “The Cosby Show,” was questioned a decade ago as part of a lawsuit brought against him by Constand. Cosby testified about a series of affairs with young women, and said he sometimes gave them pills or alcohol before sex. Constand eventually settled in 2006 for an undisclosed sum.

Another hearing on the evidence is set for December. O’Neill also must decide if 13 other accusers can testify against Cosby at the trial to show they were drugged and molested in similar fashion.

Cosby’s lawyers want the judge to bar such testimony about “prior bad acts,” saying prosecutors are reaching back to the “casting couch” era to round up accusers and build a “stale” case. The defense contends the women’s memories have been compromised by time, age and widespread news coverage of the case.

“The fact that even the most fervently held memories can actually be tainted — or altogether false — is supported by a vast existing and growing body of science,” McMonagle wrote.