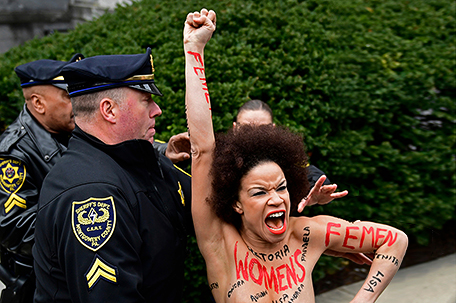 ABOVE PHOYO:  Actress Nicolle Rochelle, who appeared on several episodes of “The Cosby Show,” is detained as Bill Cosby arrives for his sexual assault trial at the Montgomery County Courthouse, Monday, April 9, 2018, in Norristown, Pa. Rochelle of Little Falls, N.J., was charged with disorderly conduct. (AP Photo/Corey Perrine)

NORRISTOWN, Pa. — Bill Cosby’s lawyer launched a blistering courtroom attack on the comedian’s accuser Tuesday, portraying her as a con artist whose goal was “money, money and lots more money.”

Lawyer Tom Mesereau told jurors in his opening statement at the former TV star’s sex-assault trial that Andrea Constand wasn’t attracted to Cosby but was “madly in love” with his fame and money and made up the accusations to score a big payday.

He said she “hit the jackpot” when Cosby paid her $3.4 million to settle a lawsuit over allegations he drugged and molested her in 2004.

Prosecutors say it was the “Cosby Show” star that betrayed Constand’s trust by giving her pills and then assaulting her at his suburban Philadelphia mansion. Cosby, 80, faces three counts of aggravated indecent assault, each punishable by up to 10 years in prison.

A jury deadlocked at his first trial last spring, setting the stage for a retrial.

District Attorney Kevin Steele had revealed the previously secret settlement amount in his opening statement on Monday, in an apparent attempt to suggest Cosby wouldn’t have paid out so much money if the accusations against him were false. 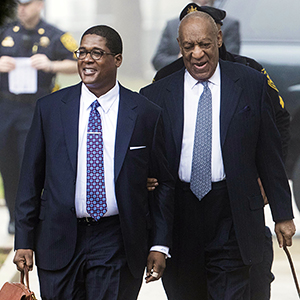 Mesereau, who won an acquittal in Michael Jackson’s 2005 child molestation case, told jurors that Constand was in deep financial trouble and attached all of her hopes to what she could milk from her relationship with Cosby.

“A con artist is what you get, ladies and gentlemen of the jury,” Mesereau said. “A con artist. And we’ll prove it.”

The comedian arrived at the courthouse Tuesday amid heightened security after topless protester, actress Nicolle Rochelle, who appeared on several episodes of “The Cosby Show” as a child jumped a barricade on Monday and got within a few feet of Cosby as the comedian entered the courthouse.

He was surrounded by five sheriff’s deputies as he walked inside Tuesday.