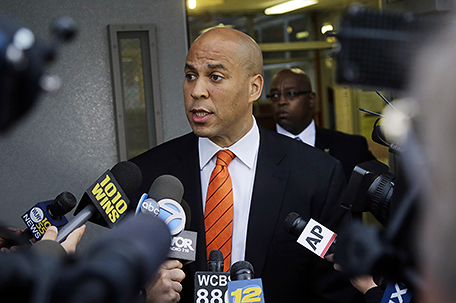 The New Jersey senator has released more documents about the Supreme Court nominee.

If civil rights activists are looking for a strong chance at stopping Brett Kavanaugh‘s confirmation, then Cory Booker may just be it. The Democratic New Jersey Senator released more documents about the Supreme Court nominee last Wednesday night.

It’s clear that Booker is pulling out all the stops when it comes to bringing the controversial nominee’s record to light. He had already released confidential documents about Kavanaugh last week under the threat of a Senate Ethics Committee review and losing his Senate seat. In adding 28 more documents to the paper trail, Booker, who clearly isn’t here for Trump’s pick, is showing no signs of backing down from challenging the confirmation.

With Booker and other Democrats’ fighting Kavanaugh replacing retired Justice Anthony Kennedy, the question is whether the Senate will consider the documents in their decision making. The documents are food for thought for the Senate Judiciary Committee, who met Thursday to discuss the matter. Senators were scheduled to vote on the confirmation later this month, according to The Associated Press.

The new batch of documents covers Kavanaugh’s role in judicial nominations and in the White House counsel’s office during the George W. Bush administration. The papers “raise more serious and concerning questions,” Booker said. Some documents show Kavanaugh’s connection to Bush’s nomination of Charles Pickering to the United States Court of Appeals for the Fifth Circuit in New Orleans — a 2002 move that was met with Senate opposition and questions about Pickering, a then-Mississippi federal judge, being racist. Pickering ultimately got the court seat.

Kavanaugh testified before the committee that he was not “substantially involved” in Pickering’s nomination.

At this point, senators have a total of 75 documents on the table about the nominee. An unapologetic Booker is on a mission in vetting Kavanaugh, who has been viewed by activists as a candidate that would undermine civil rights progress under instruction from Trump.