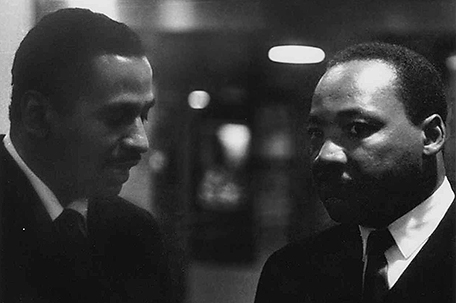 The Congressional Black Caucus issued the following statement on the passing of founding CBC member and former Congressman John Conyers:

“The Congressional Black Caucus mourns the loss of one of its founding members, the longest-serving African American in Congress, and the former Dean of the House – Congressman John Conyers. A son of Detroit and champion of civil rights, Mr. Conyers lived a life dedicated to serving the community in which he was raised. He leaves a legacy of more than 5 decades of systematic change that continues to transform our country for the better to this day.

Congressman Conyers was a veteran and soldier in the civil rights movement. After serving in the Michigan National Guard and the United States Army, he turned his efforts to voting rights and participated in the 1963 voter registration effort in Selma, Alabama. He was first elected to the House of Representatives in 1964, with the endorsement of Dr. Martin Luther King, Jr., and immediately tapped Rosa Parks to serve by his side. Congressman Conyers quickly became a trailblazer for liberal issues that eventually became mainstream.

Just four days after the assassination of Dr. King, Congressman Conyers introduced a bill to create a federal holiday in his honor and reintroduced the bill every year for 15 years until it was signed into law. Mr. Conyers continued his pursuit of voting rights in Congress as a lead co-sponsor of the Voting Rights Act of 1965. Mr. Conyers was an ardent opponent of the death penalty and fought for police brutality oversight. Now a major issue in the Democratic Presidential debates, Mr. Conyers was the first to introduce the Expanded and Improved Medicare For All Act, legislation to establish a government-sponsored, single-payer healthcare option to control costs. Mr. Conyers also championed the issue of reparations by introducing a bill to establish a commission to study the issue of slavery and race relations in America, which he fought for consideration every year.

His fight for justice extended to international issues as well. Mr. Conyers was an early leader in the anti-Vietnam War movement, in addition to the anti-Iraq War movement. He was also a vocal opponent of South Africa’s apartheid policies. Congressman Conyers joined Congressman Ron Dellums and other CBC Members in confronting President Nixon about imposing sanctions against South Africa. When it became clear he would not act, Congressman Conyers joined Congressman Dellums in introducing legislation to that end and was even arrested at a protest in front of the South African embassy.

Congressman Conyers chaired the Government Oversight and Reform Committee (formerly the Government Operations Committee) and was the first African American to chair the influential Judiciary Committee.

For the Congressional Black Caucus, Congressman Conyers was more than a founding member. He was a guiding light. We will continue his vision by serving as the “Conscience of the Congress” in pursuit of justice for all Americans. We extend our deepest condolences to his wife, sons, family, and friends.”