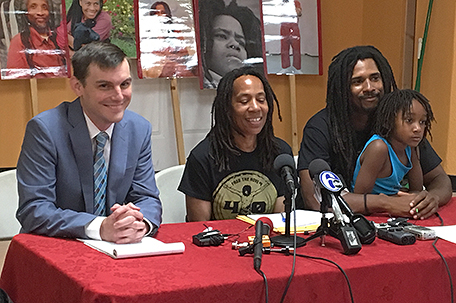 ABOVE PHOTO:  (From left) Bret Thomson, a lawyer from the Chicago-based People’s Law Center, joined MOVE members Debbie Africa and Mike Africa Jr., Debbie’s son, and her granddaughter in a press conference on Tuesday at the Faith Immanuel Lutheran Church in East Lansdowne. Debbie Africa, one of the so-called MOVE 9, was released from prison on Saturday after spending almost 40 years behind bars. (Photo courtesy: Denise Clay)

For the first time in 39 years and 10 months, Mike Africa Jr. is able to do something that a lot of people take for granted.

He can hug his mother, Debbie Africa, whenever he wants to now.

For 39 years and 10 months, Debbie Africa — part of a group of nine members of the back-to-nature group MOVE — was in prison, convicted of murdering Philadelphia Police Officer James Ramp during a confrontation between the group and police in August 1978. Her husband Mike Sr., is still in jail, but is eligible for parole in September.

Debbie was eight months pregnant when she went to jail. She had Mike in prison and only got to spend three days with him before he was taken away from her.

“It was hard,” Mike Africa Jr. said. “It was not easy. There are things that people don’t understand and take for granted, like needing a parent to talk with you. Growing up without parents and not having that guidance was hard. Luckily, I had a strong support system.”

It wasn’t easy for Debbie either.

“A mother needs to have the feeling of nurturing,” she said. “What kept me going was my beliefs.”

Because she is the first of the MOVE 9 to get out of jail, many wanted to hear what she had to say. So Debbie, Mike Jr. and one of the lawyers that got her out of jail, Brad Thomson of the Chicago-based People’s Law Office, held a news conference held at the Faith Immanuel Lutheran Church in East Lansdowne on Tuesday. They talked about efforts to get the rest of the MOVE 9 released on parole, and how Debbie and her family plan to move on to the next phase of life.

On Saturday, Debbie was released after spending 39 years and 10 months of a 30 to 100 year sentence in State Correctional Institution- Cambridge Springs. In addition to her husband, Janet Africa, Janine Africa, Eddie Africa, Delbert Africa and Chuck Africa remain in prison. MOVE 9 members Merle and Phil Africa died in prison.

There was a lot of hard work that went into the requests for parole that he and his partner Bret Grote of the Abolitionist Law Center put together for Debbie, Janet and Janine Africa. They prepared packets that detailed the facts of the case as well as a group of recommendations that included letters from former corrections officers and Philadelphia District Attorney Larry Krasner.

While they weren’t able to get all three women released, Thomson said that this is only the beginning.

“We consider this a big important step toward freeing all of the MOVE 9,” he said.

The MOVE 9 has been eligible for parole for the last 10 years, but no one had successfully received it. During the press conference, Thomson was asked if politics played a part in that decision, especially since the Fraternal Order of Police holds so much influence in the city.

Politics and the parole board aren’t supposed to mix, Thomson said.

While MOVE is certainly a political organization, parole is not supposed to be a political designation,” he said. “The Fraternal Order of Police shouldn’t have any role.”

When she was released on Saturday, it was a great moment for her, Debbie said. She’d get to hug her son and daughter. She’d get to feel the sun on her skin beyond walls.

While she will have to wear an ankle monitor for six months, Debbie Africa is free to hug her children and her nine grandchildren.

But Janet and Janine, who were also up for parole on similar charges and have served similar time, didn’t get to walk out.

That made her release bittersweet, Debbie said.

“Although I felt excited, overwhelmed and happy to see everybody when they came to pick me up on Saturday, she said, “I still felt incomplete. And I think it’s because I got released, but my sisters Janet and Janine didn’t.”

Debbie plans to spend time with her family while working to get the rest of the MOVE 9 released. She also plans to learn more about her surroundings and about such things as cell phones.

Winter is coming for your home: What you can do now to protect your wallet