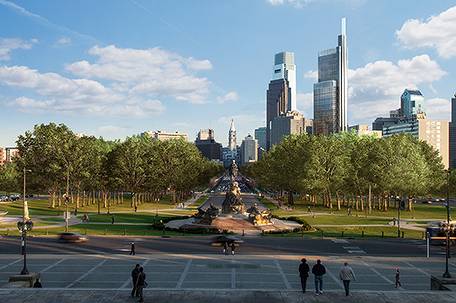 Comcast Corp. already built the tallest skyscraper in Philadelphia. On Wednesday, it announced plans to build an even taller one.

The Philadelphia-based media giant said it plans to build a $1.2 billion, 59-story technology center that will rise 1,121 feet next to the existing Comcast Center, which stands 975 feet tall and opened in June 2008.

Comcast Corp. and real estate investment trust Liberty Property Trust said the Norman Foster-designed glass and stainless steel tower would become the “dedicated home” for its expanding workforce of “technologists, engineers, and software architects.” It will also boast a media center in the heart of downtown Philadelphia that will be home to the region’s NBC affiliate, WCAU-TV, and Telemundo’s WWSI-TV.

The two companies say the project is a joint venture between them with Comcast holding 80 percent and Liberty 20 percent. Construction is set to start this summer with completion by fall 2017.

The joint venture is getting $40 million from the city and state, with Philadelphia providing $10 million and Pennsylvania $30 million in grants and $4.5 million in job creation tax credits.

“We continue to be proud to call Philadelphia our home, and are thrilled to build a world-class media, technology and innovation center right in the heart of the city, to bring NBC 10 and Telemundo 62 downtown, and to create thousands of jobs and further drive economic activity in the region,” Comcast chairman and chief executive Brian L. Roberts said in a statement.

Though it will be the tallest building in Philadelphia, the new tower would be the 34th tallest building worldwide when complete, just seven feet shy of the 1,128-foot John Hancock Tower in Chicago and nine feet taller than Moscow’s Mercury City Tower, according to the Council on Tall Buildings and Urban Habitat.

The building is set to have more than 1.5 million rentable square feet and will include a Four Seasons hotel and a block-long lobby with a glass-enclosed indoor plaza that will offset the Comcast Center’s outdoor plaza.

The lobby will feature a restaurant and a concourse that provides direct connections with the Southeastern Pennsylvania Transportation Authority’s regional commuter train hub, Suburban Station, will be extended for direct access to the new building.

“This is a very special project. It is an opportunity to create a unique and sustainable model for mixed-use, high density development, which uniquely combines spaces for high-tech research and development with restaurants, gardens, fitness facilities and a significant public reception space — a window on Philadelphia,” Foster said, adding that, at the ground level, the building aims to embrace the city.

“Above this, the highly flexible loft-like spaces and studios are designed for a dynamic way of working — an engine for the city’s evolution as the kind of leading technology hub presently associated with Silicon Valley,” Foster said.