CNN: Not happy with Brazile’s talk about debate questions 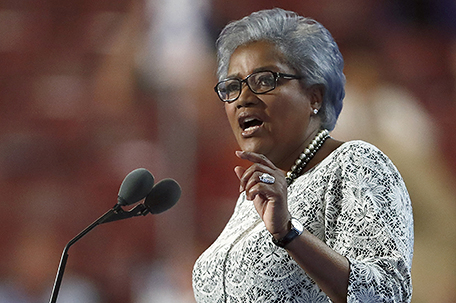 NEW YORK — CNN said it is “completely uncomfortable” to learn through WikiLeaks that former commentator Donna Brazile had contacted the Clinton campaign ahead of time about a question that would be posed during a presidential primary town hall last March in Flint, Michigan.

The network said that it had accepted Brazile’s resignation as a contributor two weeks ago; it wasn’t clear why this wasn’t announced earlier. Brazile’s deal had been suspended in July when she became interim head of the Democratic National Committee.

The material released from the hacked file of Clinton campaign chairman John Podesta revealed at least the second time that Brazile had communicated to Clinton aides about questions she might be asked on the air.

“One of the questions directed to HRC tomorrow is from a woman with a rash,” Brazile wrote to Podesta and Clinton communications director Jennifer Palmieri. Brazile added in the note from her iPad: “Her family has lead poison and she will ask what, if anything, will Hillary do to help the ppl of Flint.”

At the forum the next night, a Flint resident described her family’s problems with the city’s water system and asked Clinton, “If elected, what course will you take to regain my trust in government?”

Later in the debate, another woman asked whether Clinton or Democratic primary challenger Sen. Bernie Sanders would commit to a requirement that public water systems remove all lead service lines.

Brazile was never given access to any questions, preparation material or list of people attending any presidential forum in advance, CNN said Monday. Brazile had attended a CNN-sponsored event to distribute water that had happened earlier in Flint; there was some speculation that conversations with Flint residents there might have led to the email.

Brazile on Monday tweeted her thanks to CNN, saying she’d been honored to be a commentator there. “Godspeed to all my former colleagues,” she wrote.

She referred reporters to a statement earlier this month denying any early access to debate questions, adding she “would never have shared them with the candidates if I did.”

Another WikiLeaks-originated Podesta email released earlier this month showed Brazile relaying a question submitted by debate co-host Roland Martin before a presidential debate with Sanders. Martin, a host on the TV One cable network, headed the debate event with CNN anchor Jake Tapper.

A similar, although not exact, question on the death penalty was asked at the event.

In other WikiLeaks releases Monday from Podesta’s hacked account:

•  In an early May 2015 email, Palmieri told Clinton campaign strategist Joel Benenson that Bill Clinton should avoid answering questions about Clinton Foundation donors and Hillary Clinton’s knowledge of them. Palmieri also suggested dodging questions about an ethics agreement the Clintons signed before Hillary Clinton became secretary of state that was intended to avoid conflicts of interest with the foundation.

“These are rabbit holes,” Palmieri wrote. “Press wants us to go deeper into these subjects to try to get us to introduce more facts which will lead to more questions and give the story more life.”

Palmieri’s comments came as Bill Clinton prepared for an interview with NBC News. In the interview, which aired May 4, 2015, Clinton did answer questions about the foundation and it appears the former president didn’t take Palmieri’s advice. He answered questions about the foundation and foreign donors, saying: “There is no doubt in my mind that we have never done anything knowingly inappropriate in terms of taking money to influence any kind of American government policy. That just hasn’t happened.”

•  In an October 2015 email, Ron Klain, a former deputy to Vice President Biden who aided Clinton during her recent debate preparations, told senior Clinton foreign policy adviser Jake Sullivan that he had concerns over her stance on the Trans-Pacific Partnership trade deal.

In the message, Klain writes that Clinton “has to be for TPP,” since she called it the “gold standard” of trade agreements and opposing it would be “a huge flip flop.”

Sullivan wrote back: “I agree with you on TPP but others (including on this email!) feel strongly to the contrary.” In the end, Clinton opposed the TPP, and GOP presidential rival Donald Trump used her “gold standard” quote to taunt her during the recent presidential debates.