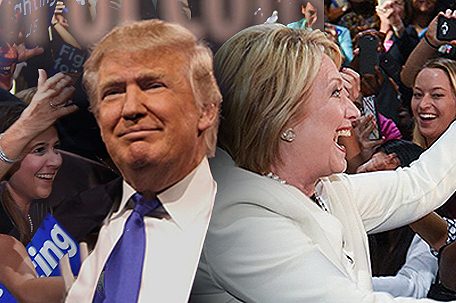 Former Secretary of State Hillary Clinton and billionaire businessman Donald Trump won sweeping majorities of the votes in the 12 Super Tuesday states this week. But, as the polls closed, the Election Protection program – designed to shield the integrity of the vote – had received more than 2,000 calls.

As much as the state wins are stressed, it’s actually the numbers of delegates that each state carries that actually count. Democrats need 2,383 delegates to win the nomination. Clinton currently has 1,055 and Sanders has 418. Republicans need 1,237 to win the nomination. Trump currently has 315, Cruz has 205 and Rubio has 106. Other primaries and caucuses will take place through Tuesday, June 14.

Streams of voters turned out on Super Tuesday, the largest group primary and caucus day of the presidential election year. But, according to poll watchers, it may not have been all fair game. The national, nonpartisan Election Protection voter hotline reportedly received more than 2,000 phone calls from voters who encountered issues while voting.

“We received hundreds of calls across the country on our 866-OUR-VOTE hotline from voters who want to participate in our democracy,” said Kristen Clarke, president and executive director of the Lawyers’ Committee for Civil Rights Under Law, in a statement issued to the media. “I spoke with one voter for over 20 minutes in Cobb County, Georgia who was not given notice that his polling place was temporarily moved and when he got to the new site, he and many other voters found a dark, unmarked building with no signs of any activity.”

The majority of calls reportedly came from Texas and Georgia, the statement said. “The hotline received a steady stream of calls throughout the day with voters seeking information as well as assistance on a range of issues resulting from poll worker misinformation, voter ID problems, overcrowded polls, long lines and ballot shortages.”

Meanwhile, Clinton and Sanders faced off in yet another debate, last Sunday, in Flint, Mich., where a government water crisis has poisoned thousands of most Black people, including children, with the led. Democrats also debated on March 9 in Florida and two more debates will be held in April and May, but details have not been announced. The final Republican debates were March 3 in Detroit, March 10 in Miami and March 21 in Salt Lake City.

The nominees will be selected during the Democratic Convention in Philadelphia July 25-28 and during the Republican Convention in Cleveland July 18-21. But, as voters prepare to head for the polls Nov. 8, the apparent voter violations reported on Super Tuesday underscored the need for close oversight.

“Today, hundreds of thousands of voters from Virginia to Alabama to Texas headed to the polls and many called 866-OUR-VOTE to receive information and report problems,” said Marcia Johnson Blanco, co-director of the Voting Rights Project. “As in years past, this election showed the continuing need for Election Protection to provide services year-round to help voters as they prepare to cast ballot.”

The Election Protection program will continue providing support to voters during the 2016 presidential primary season and through the Nov. 8 election.

Clarke concluded, “Our experience on Super Tuesday shows that much work remains to be done to strengthen our voting process across the country.”