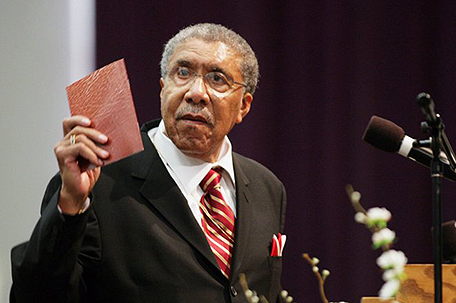 CHICAGO — Prominent Chicago minister and gospel music singer the Rev. Clay Evans, a civil rights activist who embraced Dr. Martin Luther King Jr. when he expanded his movement out the south, is dead at age 94.

Evans’ November 27 death was announced firstin a social media post by the Rev. Charles Jenkins, who in 2000 succeeded Evans as pastor of the Fellowship Baptist Church on Chicago’s South Side. Evans led the church for 50 years.

Jenkins praised Evans as a civic leader and “trusted counselor” to anyone in need of advice. Former Mayor Rahm Emanuel said Chicago is a better city because the Brownsville, Tennessee native spoke out on the issues.

Funeral director Spencer Leak, who was King’s chauffeur in Chicago, noted when King brought his movement to the city in the 1960s, that Evans was one of the few black ministers who embraced the civil rights leader.