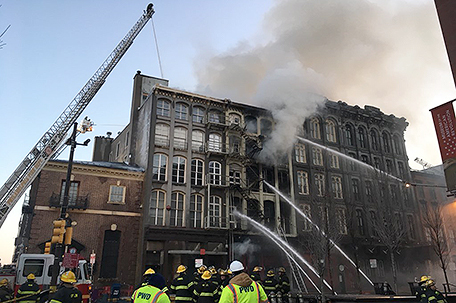 City officials say an early morning fire at a building in Philadelphia’s Old City has left the structure “imminently dangerous.’’

David Perri, commissioner of the Department of Licenses and Inspections, said the property appeared to be a “total loss.’’

After evaluating the damage Monday, the agency ordered the building’s owner to remove an exterior fire escape to take the weight off the building facade on the upper floors. Perri says officials hope to save “the historic cast-iron facade.’’

Scores were evacuated from the building and adjacent structures after the alarm was sounded shortly after 3 a.m. Sunday. Fire crews reported the building engulfed in flames that were brought under control by 7 a.m. Sunday. No injuries were reported.

Monday afternoon, ATF investigators rose high above to get an aerial view of the damage, as they work to figure out what caused the 4-alarm fire that burned through several buildings along this historic Old City block Sunday morning.

Dozens were forced to evacuate from their homes and hotel rooms at the Best Western, just a few doors down.

“At like 3:45 in the morning – just all of a sudden wha, wha, wha, wha – and you walk up all scared and disoriented,” said Jessica Garcia, who was staying in the Best Western at the time the fire broke out. “One of the guys on our floor was banging this isn’t a joke you have to get up.” 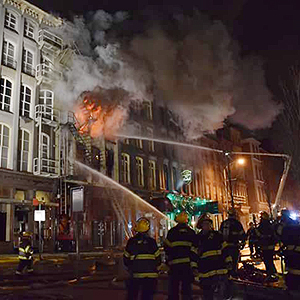 This afternoon, hotel guests were allowed to access some rooms to retrieve belongings. They snapped photos showing damage inside.

“They called us this morning and said that we could come in and get our items that are in the rooms,” said Allison Longenhagen of Bethlehem, Pennsylvania. “They said there’s about 3-4 inches of water in the rooms, and that some things may or may not be salvageable, which is fine because we’re all okay.”

L and I says the building is in imminent danger of collapsing. The people who lived on the upper floors have nothing to return to.

“We realize that residents who lost their apartments are in a much bigger fix than we are,” said Cindy Johnson, of Morristown, New Jersey. “All we need is our car keys and we’ll be okay. Stuff is stuff.”

The cause of the blaze remains unknown.

6 Action News contributed to this report.