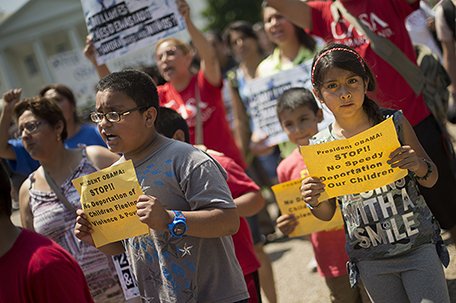 ABOVE PHOTO:  Alexandria Diaz, 9, from Baltimore, Md., joins her parents during a march in front of the White House in Washington, Monday, July 7, 2014, following a news conference of immigrant families and children’s advocates responding to the President Barack Obama’s response to the crisis of unaccompanied children and families illegally entering the US. A top Obama administration official says no one, not even children trying to escape violent countries, can illegally enter the United States without eventually facing deportation proceedings.  (AP Photo/Pablo Martinez Monsivais)

WASHINGTON — A top Obama administration official says no one, not even children trying to escape violent countries, can illegally enter the United States without eventually facing deportation proceedings.

But Homeland Security Secretary Jeh Johnson basically acknowledged Sunday that such proceedings might be long delayed, and he said that coping with floods of unaccompanied minors crossing the border is a legal and humanitarian dilemma for the United States.

“Our border is not open to illegal migration, and we are taking a number of steps to address it, including turning people around faster,” Johnson told NBC’s “Meet the Press.” At the same time, he said, the administration is “looking at ways to create additional options for dealing with the children in particular, consistent with our laws and our values.”

Repeatedly pressed to say whether thousands of Central American children will be deported promptly, Johnson said, “We need to find more efficient, effective ways to turn this tide around generally, and we’ve already begun to do that.”

More than 50,000 unaccompanied minors have been caught on the U.S.-Mexico border this year. Most are from Guatemala, Honduras and El Salvador, where spikes in violence and poverty are prompting parents to send their children on difficult and dangerous journeys north.

Their numbers have overwhelmed federal agencies. When 140 would-be immigrants — mostly mothers with children — were flown to southern California to ease an overcrowded Texas facility, angry residents of Murrieta, California, greeted the bus as it pulled into town, complaining that they were being saddled with more than their share.

Rep. Henry Cuellar, D-Texas, said the administration “is one step behind” a major dilemma that was foreseeable. The number of children coming from Central America without adults has been rising dramatically for several years.

A George W. Bush-era law to address human trafficking prevents the government from returning these children to their home countries without taking them into custody and eventually through a deportation hearing. Minors from Mexico and Canada, by contrast, can be sent back across the border more easily. The administration says it wants more flexibility under the law.

Johnson said the administration has dramatically sped up the processing of adults who enter the country illegally, and it is opening more detention facilities. He acknowledged that the unaccompanied children from Central America, some 9,700 taken into custody in May alone, pose the most vexing problem.

Unaccompanied Central American children generally are being released to relatives already in the United States. Mothers with their children often are released with a notice to appear later in immigration court.

Johnson said the U.S. government is trying to send the message that all people who enter the country illegally will face deportation proceedings eventually. In Central America, he said, “the criminal smuggling organizations are putting out a lot of disinformation about supposed free passes into this country” that will expire soon. “We’re cracking down on the smuggling organizations by surging law enforcement resources,” Johnson said.

Johnson and others are warning of the dangers that immigrants, and especially children, face when the try to reach the United States on their own. Johnson is scheduled to meet with Guatemalan officials later this week.

Sen. Lindsey Graham, R-S.C., said children entering the country illegally must be sent home. If not, Graham said, “you’re going to incentivize people throughout that part of the world to keep sending their children here.”

Graham said foreign aid should be cut off to countries that don’t do more to discourage illegal immigration to the United States.

Perry appeared on ABC’s “This Week”; Cuellar was on CNN’s “State of the Union”; Graham was on CBS’ “Face the Nation.”