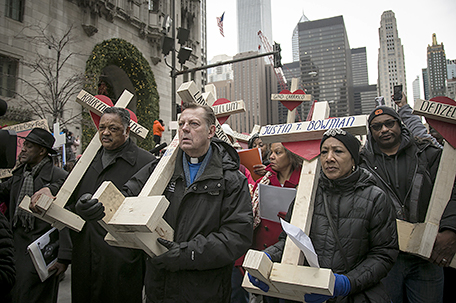 ABOVE PHOTO:  FILE – In this Dec. 31, 2016, file photo, the Rev. Jesse Jackson, Rev. Michael Pfleger, center, and state Sen. Jacqueline Collins, right, lead hundreds in a march down Michigan Avenue, carrying crosses for all those killed by Chicago violence in 2016. President-elect Donald Trump said Chicago Mayor Rahm Emanuel should ask for federal help if he isn’t able to bring down a homicide count that soared last year. Trump isn’t the first to broach the idea that the U.S. government could do more to stem violence in Chicago. But what more it can do isn’t at all clear. (Ashlee Rezin /Chicago Sun-Times via AP)

CHICAGO — Chicago ended 2017 with fewer homicides than the year before, but gang violence in the city’s most dangerous neighborhoods kept the total number of killings above the 600 mark for only the second time in more than a decade.

The Chicago Police Department released statistics Monday that show the number of homicides fell from 771 in 2016 to 650 last year. The number of shootings dropped from 3,550 to 2,785 during the same period.

Although the drops were significant, the homicide total in a repeat of 2016 eclipsed the number of killings in New York City and Los Angeles combined.

“You still have to start with the fact that 600 people dead in Chicago is a hell of a lot of people to be dead in one year,” said the Rev. Marshall Hatch, whose church is in one of the most violent neighborhoods on the city’s West Side.

Still, the drops — and the reasons behind the lower numbers — have police and others optimistic that some of their efforts will lead to more declines over the next year. Chief among those efforts will be the expansion of the high-tech strategies and equipment to fight crime, including devices that pinpoint where gunshots are fired.

“I am proud of the progress our officers made in reducing gun violence all across the city in 2017,” Chicago Police Superintendent Eddie Johnson said in a statement. “In 2018, we are going to work to build on the progress we made last year — to reduce gun violence to save lives and to find justice for victims.”

Police have been particularly encouraged by the results of setting up Strategic Decision Support Centers in six of the city’s 22 police districts, including those in the most violent pockets of the city. The centers are equipped with sound-detection technology that enables the department to instantly know where the sound of gunfire is coming from and to alert officers through computer screens in their squad cars and smartphones.

One of the first districts where a center was set up was in Englewood, a neighborhood on Chicago’s South Side that has long been known as one of the city’s most violent.

Englewood had seen 48 homicides as of late December, compared to 86 during the same period in 2016. Police hope the trend continues in the neighborhood. They plan to roll out centers in six more police districts this year.

“It does seem like the timing of when we see Englewood turn the corner was in February just as the Strategic Decision Support Center was opened,” said Max Kapustin, research director at the University of Chicago’s Crime Lab.

Johnson said, “It’s no coincidence that Englewood is leading the city on shooting reductions.”

There were reminders in 2017, though, that gang violence continues to rage in the city and take lives no matter what strategies police try to implement. In one suspected gang shooting in February, a 2-year-old boy was killed on the West Side while riding in a car with his uncle. Police believe the 26-year-old uncle, a gang member, was the intended target.

To crack down on gang members, Johnson said prosecutors and police will step up use of the state’s anti-racketeering law “to hold leaders of these gangs more accountable.” Cook County prosecutors first tested the Street Gang RICO Act in a trial that ended last month with the conviction of half a dozen leaders of a West Side street gang.

The department is also bringing on more officers, and they will be dispatched to some of the city’s most violent areas. As part of a two-year hiring plan, Chicago added more than 1,100 officers in 2017 and Johnson expects the department’s total number of sworn officers to increase in 2018 — from the current 12,575 to 14,400.

“With more foot officers out there we are better able to get ahead of crime and know where there are going to be conflicts,” said police union head Kevin Graham, who has been adamantly pushing the city to hire more officers.

Hatch, the West Side minister, hopes Chicago’s homicide numbers continue to fall, but worries this will bring complacency and a feeling that more officers and technology are all the city needs.

“My concern is that if we put too much emphasis … on policing and technology and not enough on the investments in social services, those numbers will go up again because we have not addressed the social conditions that are driving all the violence,” he said.

One of Chicago’s bloodiest years ends with 762 homicides