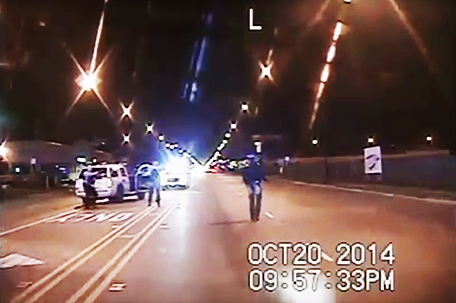 ABOVE PHOTO:  In this Oct. 20, 2014 frame from dash-cam video provided by the Chicago Police Department, Laquan McDonald, right, walks down the street moments before being shot by officer Jason Van Dyke in Chicago. Amid an outcry after the city waited more than a year to release dash-cam footage of Officer Van Dyke shooting McDonald 16 times, Mayor Rahm Emanuel announced that he was setting up a special task force to examine, among other things, the city’s video-release policy.  (Chicago Police Department via AP, File)

By Michael Tarm and Don Babwin

CHICAGO — With federal agents preparing to scrutinize Chicago’s police practices in a wide-ranging civil rights investigation, Mayor Rahm Emanuel is defending measures the city has already taken in the wake of protests over the fatal shooting of a black teenager by a white officer.

Emanuel said the city would press ahead with initiatives of its own just hours after U.S. Attorney Gen. Loretta Lynch announced the Department of Justice investigation into racial disparities and the use of force by Chicago police, saying at a news conference that he was “not going to wait.”

But such assurances are likely to be met with skepticism in a city that’s been plagued for years by a string of incidents of apparent police abuse followed by promises of reform. Several activist groups said they planned further protests in light of a decision announced Monday by Cook County’s top prosecutor not to criminally charge another officer for shooting a 25-year-old black man under different circumstances.

Emanuel said at a Monday afternoon news conference outside his office at City Hall that the shooting of 17-year-old Laquan McDonald by Officer Jason Van Dyke had brought the city to what he called “an inflection point.” A squad-car video of the shooting sparked days of protests, criticism of how Emanuel and other officials handled the incident, and calls for federal intervention.

“It is clear to me when you look at Laquan McDonald and other experiences – and they go way back in history – then none of the things we’ve done in the past have measured up to the scope, the scale and consequences of what needs to be done,” Emanuel said.

Emanuel introduced a newly appointed leader of the city’s Independent Police Review Authority, which investigates police shootings. Since the shooting, he has also established a task force to improve police accountability and named an interim police chief after forcing out Superintendent Garry McCarthy.

The federal intervention follows recent ones in Baltimore and Ferguson, Missouri, and comes nearly two weeks after the release of the squad-car video showing Van Dyke shooting the teenager 16 times. Van Dyke was charged with first-degree murder Nov. 24, more than a year after the killing and just hours before the release of the footage.

The civil rights investigation, which is separate from an existing federal criminal investigation of the shooting itself, will also review how the department handles misconduct accusations. Justice Department officials say they use so-called patterns-and-practices probes to identify systemic failings in troubled police departments and to improve trust between police and the communities they serve.

Emanuel initially said a federal civil rights investigation would be “misguided,” but then later reversed course. He indicated repeatedly on Monday that he now welcomed the federal intervention.

Also Monday, Cook County State’s Attorney Anita Alvarez said there would be no charges against Officer George Hernandez in a separate case – the shooting of the 25-year-old black man, Ronald Johnson III, who was shot in the back while fleeing the police. Authorities say he was carrying a gun in his hand as he was killed on Oct. 12, 2014. 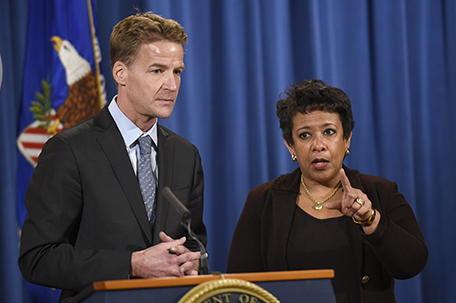 Attorney General Loretta Lynch, right, and U.S. Attorney in Chicago Zachary Fardon, left, speaks during a conference at the Justice Department in Washington, Monday, Dec. 7, 2015, about an investigation into the patterns and practices of the Chicago Police Department after recent protests over a video showing a white Chicago police officer shooting a black teenager 16 times. (AP Photo/Susan Walsh)

The video shows Johnson running from police across a street with several officers in pursuit, and then one officer fires. Johnson is not on screen when he was struck by two bullets.

The video was also slowed down to show what McCarthy said was a gun in Johnson’s hand. Prosecutors say a loaded weapon was found in his hand after he was killed. She also said Johnson ignored officers’ commands to stop and drop his weapon and had been in a physical altercation with at least one other officer before he was shot.

The attorney for the Johnson family, Michael Oppenheimer, said the prosecutors’ investigation was a “joke” and an affront to Johnson’s family and Cook County citizens. They have filed a lawsuit against the city, claiming that Johnson was not armed when killed.

Organizers said late Monday that roughly 50 to 100 protesters were marching and rallying on the city’s South Side. Some chanted for Alvarez and Emanuel to step down.

Alvarez has been criticized for not filing charges long ago in the McDonald case, in which the video shows the teen veering away from officers when Van Dyke opens fire from close range. He continues shooting even after McDonald crumples to the ground.

At the news conference Monday, reporters asked Interim Police Superintendent John Escalante why he and other department brass approved a report in which Van Dyke and other officers described McDonald as acting aggressively moments before he was shot – accounts that seemed to contradict video footage. Escalante responded that superiors didn’t have to sign off on the officers’ accounts – and when pressed later on the issue, he left the room with Emanuel without responding.

The Chicago City Council signed off on a $5 million settlement with McDonald’s family even before the family filed a lawsuit, and city officials fought in court for months to keep the video from being released publicly. The city’s early efforts to suppress the footage coincided with Emanuel’s re-election campaign, when the mayor was seeking African-American votes in a tight race.

Also late Monday, the city released a video from 2012 that shows officers dragging a handcuffed suspect by the wrists. The 38-year-old suspect, Philip Coleman, later died of what authorities described as a reaction to an antipsychotic drug. A police review board found the officers’ actions justified, but Escalante said Monday that the matter is under investigation and Emanuel said the case is not closed.

The Justice Department has opened 23 investigations of police departments since the start of the Obama administration.

If the Justice Department finds systemic violations, the investigations typically result in court-enforceable agreements between the federal government and the community that serve as blueprints for change and are overseen by an independent monitor. The federal government has the option of suing a police department that is unwilling to make changes.