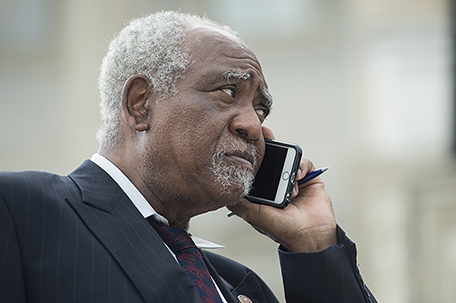 CHICAGO — A dispute over shoes led to the fatal shooting of the grandson of Illinois U.S. Rep. Danny Davis, Chicago police said Saturday.

At least two attackers went to the home of 15-year-old Javon Wilson in the Englewood neighborhood of Chicago on Friday night and shot him in the head after an argument, police said.

Guglielmi said Wilson knew his attackers and they may have been friends at some point. The shooting was not, as previously reported, a home invasion.

Davis, a Democratic member of the House for 20 years, told The Associated Press Saturday that his grandson was a victim of a world where gun violence has become commonplace.

“It’s almost, just the way it is. People think nothing of it,” Davis said.

Chicago has seen a dramatic rise in the number of shootings and homicides, with August being the deadliest month in the city in two decades. There have been 673 homicides so far this year, including the fatal shootings of the cousin of Chicago Bulls basketball star Dwyane Wade, a Chicago police officer’s son and the son of a famed percussionist.

Davis said he was told a 15-year-old boy had traded slacks for shoes with Wilson’s 14-year-old brother, but thought better of the trade and went to Wilson’s house with a 17-year-old woman. He said the pair forced their way in the house and argued with Wilson before the boy pulled a gun and fired.

Police have not arrested anyone or named any suspects, but Guglielmi said investigators have good leads.

Davis, who was re-elected this month to his 11th term in the 7th Congressional District and is a former Chicago alderman, was in Chicago on Friday and spoke with reporters after talking to police. He wondered how the shooter obtained the gun and said he’d continue to try to combat gun violence.

Davis said his grandson was “a pretty regular kid” who loved playing basketball and knew all the pros and their stats, who also loved music and whose grades were improving after a rough patch.

“The question becomes where does a 15-year-old obtain a gun? Who let the 15-year-old have a gun and under what circumstances?” Davis asked. “There’s no answer for that except that the availability of guns is so prevalent in America to the point where you almost can’t tell who has a gun” anymore.