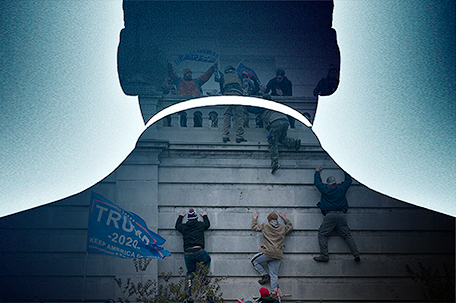 As we prepare to celebrate the Rev. Dr. Martin Luther King Jr.’s birthday, the answer to that question has never been more up in the air.

In 1967, as he sat down to write “Where Do We Go From Here? Chaos or Community,” the Rev. Dr. Martin Luther King was taking stock of the progress of race relations in America now that the Civil Rights Act of 1964 and the Voting Rights Act of 1965 had been passed.

King realized that despite all the work that had been done to get those particular pieces of legislation passed, they were only the beginning. Poverty in the Black community was still pretty intractable. In spite of what was mandated by Brown v Board of Education of Topeka, Kansas, education may not be segregated anymore, but it was still unequal.

And a law being on the books doesn’t guarantee its enforcement. If enforcement were assured, the Voting Rights Act wouldn’t have been needed in the first place because emancipation would have guaranteed voting rights for Blacks.

For the change to be permanent, it would have to be structural. And while King wasn’t completely in agreement with Black nationalism, there were parts of the Black Power movement that he thought made sense, especially in the area of economic justice.

But structural change doesn’t come without a fight because privilege, like cocaine, is a helluva drug. Giving up the right to live in a society that’s specifically tailored to you at the expense of everyone else takes the kind of character not everyone has.

Which is why I thought of King’s assessment as I watched President Donald Trump do what can only be described as weaponizing white privilege and aiming it at the Capital Building in Washington, D.C. last week.

Congress — and Vice President Mike Pence — were in the Capitol building certifying the election results that would officially make Joe Biden the President-elect when Trump ginned up a crowd hopped up on a combination of white grievance and enough misinformation to choke a horse and aimed them at Congress.

Five people were killed in the melee, including a Capitol policeman.

But lest you think that the craziness that happened at the Capitol on Jan. 6 happened in a bubble, it didn’t.

Because let’s be honest. While many more mainstream Republicans keep trying to tell you that Trump’s special brand of heinous — a heady cocktail of racism, white grievance and the ability to get people to accept the most bold-faced of lies as the truth — isn’t representative of who they are as a party, that’s incorrect.

If anything, the Trump Racism is the most virulent strain they’ve ever cooked up. The only reason they’re denouncing it is because they can’t control it and, as proven by the chants of “Hang Pence” at the Capital riot, Trump has no problem aiming it at them.

Need an example? Let’s go back to a time when we had a president that didn’t make you hang your head in shame whenever he spoke.

During one of the times where America looked like it might be headed toward the “Beloved Community” that King called for, Americans took to the polls to vote for Barack Obama, the nation’s first Black president. While this was a multicultural vote, Republicans in Congress, led by Senate Majority Leader Mitch McConnell, got together at one of Washington’s power restaurants and pledged to make Obama a one-term president.

Meanwhile at the state level, Republican lawmakers, disturbed by the concept of people of color voting in people who might not honor white privilege as a default, took legislating voter suppression to an art form.

Lawmakers in places like North Carolina created the kinds of laws that were so restrictive that the Supreme Court singled them out for the way that they “target African-Americans with almost surgical precision.”

In other words, the idea was to make sure there was never another Obama.

So, it stood to reason that the Republicans would allow Trump, a man who first came to prominence for violating the Fair Housing Act and whose first endorsement came from the former Grand Dragon of the United Klans of America, to become their standard bearer.

The only problem they had with him is that he said the quiet part — in the form of Muslim bans, family separations and trying to get the votes of Blacks in places like Philadelphia nullified — loud.

And for more than 74 million people, most of them white, this much stronger, much more virulent form of racism wasn’t a deal breaker.

So where do we go from here? Chaos or community?

That depends on what happens over the next four years. If we saw nothing else on Jan. 6, we saw that for many, the concept of community is still too frightening to them.

Besides, as I said earlier, white privilege is a helluva drug.

And getting through rehab is harder for some folks than others.

Rep. Evans stunned in the midst of Capitol chaos