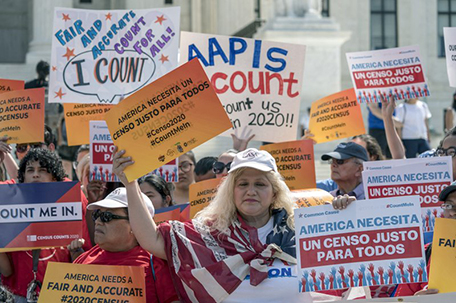 ABOVE PHOTO: Immigration activists rally outside the Supreme Court as the justices hear arguments over the Trump administration’s plan to ask about citizenship on the 2020 census, in Washington. The U.S. Census Bureau has spent much of the past year defending itself against allegations that its duties have been overtaken by politics. With a failed attempt by the Trump administration to add a citizenship question, the hiring of three political appointees with limited experience to top positions, a sped-up schedule and a directive from President Donald Trump to exclude undocumented residents from the process of redrawing congressional districts, the 2020 census has descended into a high-stakes partisan battle. (AP Photo/J. Scott Applewhite, File)

ORLANDO, Fla. — A federal judge has ordered the U.S. Census Bureau for the time being to stop following a plan that would have had it winding down operations in order to finish the 2020 census at the end of September.

The federal judge in San Jose late Saturday issued a temporary restraining order against the Census Bureau and the Commerce Department, which oversees the agency.

The order stops the Census Bureau from winding down operations until a court hearing is held on Sept. 17.

The once-a-decade head count of every U.S. resident helps determine how $1.5 trillion in federal funding is distributed and how many congressional seats each state gets in a process known as apportionment.

The temporary restraining order was requested by a coalition of cities, counties and civil rights groups that had sued the Census Bureau, demanding it restore its previous plan for finishing the census at the end of October, instead of using a revised plan to end operations at the end of September. The coalition had argued the earlier deadline would cause the Census Bureau to overlook minority communities in the census, leading to an inaccurate count.

In her order, U.S. District Judge Lucy Koh wrote that previous court cases had concluded that it’s in the public interest that Congress be fairly apportioned and that the federal funds be distributed using an accurate census.

“Thus, the balance of the hardships and public interest tip sharply in Plaintiffs’ favor,” Koh said.

In a message emailed to regional offices and headquarters, the Census Bureau said the statistical agency and the Commerce Department “are obligated to comply with the Court’s Order and are taking immediate steps to do so.” Further guidance would be provided later, the bureau said.