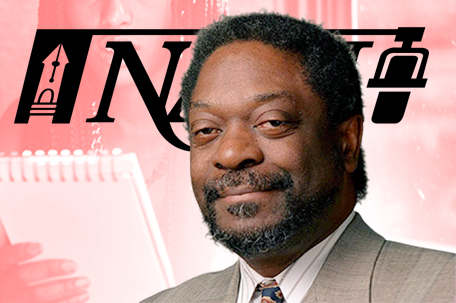 ABOVE PHOTO:  Les Payne, a journalist for nearly four decades with Newsday. The newspaper reported Tuesday, March 20, 2018, that Payne died unexpectedly Monday night at his home in Harlem. He was part of the Long Island newspaper’s reporting team that won a Pulitzer Prize in 1974 for a series titled “The Heroin Trail.” (Ken Spencer/Newsday via AP)

The National Association of Black Journalists (NABJ) honors the legacy of NABJ Founder and former President Les Payne – an award-winning journalist who consistently broke barriers during his indelible career that spanned more than four decades.

Mr. Payne died on Monday night at the age of 76.

Mr. Payne was a trailblazer in journalism, having been a role model for many journalists who came after him. NABJ president Sarah Glover said Payne’s work was both inspiring and encouraging.

“NABJ Founder and President Les Payne was a legendary journalist whose eloquent writing brought passion and truth-telling to an industry too often tone deaf to the issues impacting communities of color. Payne fought to change that with NABJ’s other illustrious founders,” said Glover.

“Founder Payne’s bold words and writings showed us why it’s important to be a present Black journalist in the newsroom every day. He was a quiet, courageous and loving leader. His legacy lives on in us.”

Mr. Payne’s wife, Violet, shared how her late husband was a mentor to younger journalists, and that he maintained high hopes for them.

“I feel very humbled to have been his wife. I enjoy hearing about all the people that he inspired. He had such great hope for the younger generation to carry on,” she said. 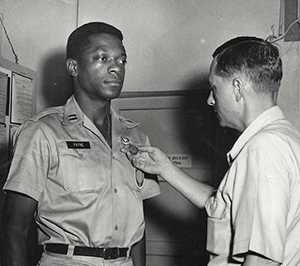 We honor Mr. Payne by noting a few of his most reputable accomplishments.

Mr. Payne served as an information officer for the U.S. Army, running the Command newspaper, which was distributed to troops in Vietnam.

As one of the founders and former presidents of NABJ, he was a long-time advocate for journalists of color, having worked tirelessly to improve newsroom equality and employment practices. 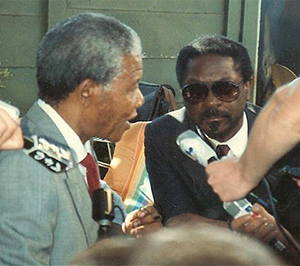 Mr. Payne was noted by Newsday as a “chronicler of some of the 20th century’s most memorable events as a champion for racial equality.”

Newsday co-publisher Debby Krenek regarded him as a “champion of strong journalism” and noted his “passion for uncovering the truth, no matter how difficult” as an inspiration. 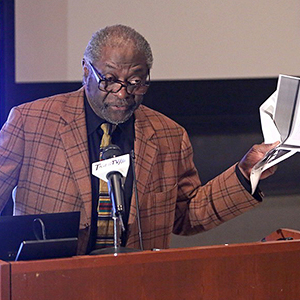 An undeniable visionary (Photo by Charles A. Smith / www.jsumsnews.com)

Mr. Payne won a Pulitzer Prize for the 33-part Newsday series, “The Heroin Trail,” in 1974 which traced the international flow of heroin from the poppy fields of Turkey to the veins of drug addicts in New York City.

In recognition of his pioneering journalism career, Mr. Payne was inducted into the Long Island chapter of the Society of Professional Journalists’ (SPJ) Hall of Fame in 2016.

Mr. Payne was also inducted into the Hall of Fame for the New York City Chapter of SPJ, the Deadline Club, in 2017.

Glover recently asked NABJ founders to write an essay on their reflections on the Kerner Commission Report. Within 24 hours, Founder Payne submitted a work of art, bringing us all back to a time 50 years ago that sadly mirrors the realities of today.

Only one of few founders to also serve as NABJ president, Payne was truly a “people’s president.” He was beloved.

In addition to his wife Violet, Mr. Payne is survived by his  children, Tamara, Jamal and Haile.