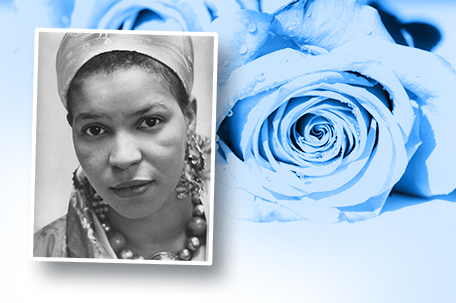 Variety magazine has reported that playwright Ntozake Shange, who wrote the 1975 Tony-nominated play “For Colored Girls Who Have Considered Suicide/When the Rainbow is Enuf,” died Saturday in Bowie, Maryland, according to her family. She was 70.

Shange, who was also a poet and author, had suffered a series of strokes in 2004 and died at an assisted living facility.

Poet, performance artist, playwright, and novelist Ntozake Shange was born Paulette Williams on October 18, 1948, in Trenton, New Jersey. She earned a Bachelor of Arts degree in American studies from Barnard College in 1970 and then left New York to pursue graduate studies at the University of Southern California in Los Angeles. It was during this time that she took the name “Ntozake” (“she who comes into her own things”) “Shange” (“she who walks like a lion”) from the Zulu dialect Xhosa. She received an Master of Art in American Studies degree from USC in 1973.

Among her plays are “Daddy Says” (1989); Spell #7 (1985); “From Okra to Greens/A Different Kinda Love Story” (1983); “A Photograph: Lovers-in-Motion” (1981); and the renowned “for colored girls who have considered suicide/when the rainbow is enuf” (1977), which won an Obie Award and received Tony, Grammy, and Emmy Award nominations. The play, or “choreopoem,” became an instant classic. Performed by an ensemble of seven African-American women, the play is comprised of monologues, movement, and poems that together describe the pain and struggle women face because of racism and sexism.

Theater critic Clive Barnes wrote about the play, “This is true folk poetry. It springs from the earth with the voice of people talking with the peculiarly precise clumsiness of life. It is the gaucheness of love. It is the jaggedness of actuality” (The New York Times, June 2, 1976).

About her writing, the poet Ishmael Reed said, “No contemporary writer has Ms. Shange’s uncanny gift for immersing herself within the situations and points of view of so many different types of women.”

Among her numerous honors are fellowships from the Guggenheim Foundation and the Lila Wallace-Reader’s Digest Fund, and a Pushcart Prize. Shange lived in Brooklyn.

Variety contributed to this report.