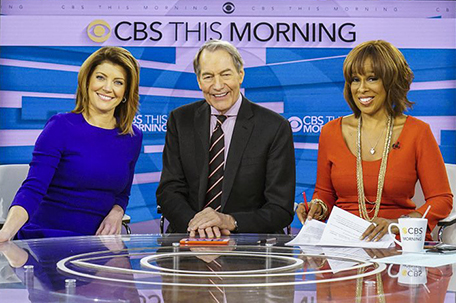 ABOVE PHOTO:  This image released by CBS shows, from left, Norah O’Donnell, Charlie Rose and Gayle King on the set of “CBS This Morning.” Rose’s co-hosts on “CBS This Morning” sharply condemned their suspended colleague Tuesday, Nov. 21, 2017, after the airing of sexual misconduct allegations that included groping female staffers and walking around naked in front of them, saying that it’s a time of reckoning in society.  (CBS via AP)

Rose has been one of three hosts of “CBS This Morning” since 2012 and is also a contributor to “60 Minutes.” PBS and Bloomberg also suspended airings of Rose’s nightly interview show after the Washington Post published an article Monday about women who said he groped them and walked around naked in front of them.

CBS News President David Rhodes said there is nothing more important than assuring a safe, professional workplace. CBS had already suspended him.

“CBS This Morning” was put in the unusual position of reporting on one of their own hosts as their lead story Tuesday.

Rose’s morning show co-hosts on CBS were shaken by the sexual misconduct allegations against him, but say they support the women who have come forward to tell their stories. Gayle King and Norah O’Donnell were sharply critical of their colleague. King said the allegations did not fit the Rose she knew, but that “I’m clearly on the side of the women who have been very hurt and damaged by this.”

Rose is the latest public figure to be felled by sexual misconduct allegations, with PBS also halting distribution of his interview show.

O’Donnell says it’s a time of reckoning for women. “This has to end,” she said.