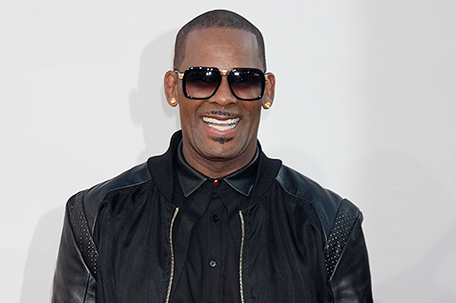 A suburban Chicago woman posted the $100,000 bail for R. Kelly to be freed from jail while he awaits trial on sexual abuse charges.

The Chicago Tribune reports that court records show a 47-year-old Romeoville, Illinois, woman posted the bail — 10 percent of the $1 million bond that a judge set — on Monday. The newspaper reports she identified herself on the bond slip as “a friend” of the singer.

Kelly had been behind bars since his arrest on Friday.

His release Monday from a Chicago jail came hours after his lawyer pleaded not guilty on his behalf to all 10 counts of aggravated sexual abuse that Kelly faces. He’s accused of sexually abusing four people dating back to 1998, including three underage girls.

Kelly was tried and acquitted of child pornography charges in 2008.

Tears streamed down Kelly’s cheeks as a court official read a jury’s not guilty verdict to all 14 counts of child pornography at his 2008 trial in Chicago. The R&B superstar had successfully dodged up to 15 years in prison and likely financial ruin.

Eleven years later, Kelly, now 52, is headed back to the same Cook County courthouse to face even more serious charges. A grand jury indictment unsealed Friday charges him with 10 counts of aggravated sexual abuse. In 2008, there was one alleged victim. This time, there are four — including at least three between the ages of 13 and 17 when the abuse allegedly occurred.

Most critically, this time, prosecutors seem to have victims willing to cooperate. If convicted, the Grammy Award-winning singer could be sentenced to up to 70 years behind bars.

Kelly’s attorney, Steve Greenberg, told The Associated Press in a phone interview Friday that his client is devastated to be facing charges once again.

“He is extraordinarily disappointed and depressed,” he said. “He is shell-shocked by this.”

He added that prosecutors had “succumbed to the court of public opinion, who’ve convicted him,” adding that Kelly looked forward to being acquitted at another trial.

One of Kelly’s victims in the new case was allegedly assaulted by him within just a year or two after his 2008 trial ended; the other allegations date to the late 1990s and early 2000s, according to the indictment.

Prior to the 2008 trial, prosecutors didn’t state publicly why they chose not to charge and try Kelly for sexual assault. But legal experts widely agreed it had to do with victim’s unwillingness to testify. Child pornography was, or should have been, far easier to prove even without an alleged victim cooperating.

At the heart of that child pornography trial was a VHS recording that prosecutors said showed Kelly, in his 30s at the time, having sex with a girl as young as 13 sometime between 1998 and 2000.

Prosecutors played the 27-minute VHS tape — entered as “People’s Exhibit No. 1” — nearly every day for jurors during the monthlong trial. In it, a man has sex with a young female, who is not wearing any clothes for most of the recording. He speaks to her in a hushed voice, and she calls him “Daddy.” At one point, the man urinates on the girl.

There are indications video evidence may be available in the new case. Attorney Michael Avenatti said he recently turned over a VHS tape of Kelly having sex with a 14-year-old to prosecutors. He said the girl is one of the alleged victims in the new case against Kelly.

All prosecutors had to prove at trial in 2008 was that the girl was underage, that it was, in fact, Kelly in the video and that he had possessed the recording. At a future trial, prosecutors may enter video evidence, but proving the charges would depend first and foremost on testimony of victims.

The atmosphere of intolerance for sexual misconduct in the #MeToo era, may have emboldened Cook County State’s Attorney Kim Foxx leading up to charges. And the loss at trial in 2008 stung the office, before Foxx headed it, said Monu Bedi, a professor at the DePaul University College of Law

“Her office may feel justice wasn’t done and they may want to take another stab at it,” he said.

Kelly’s attorney earlier criticized Foxx for using strong language in a public statement in January to characterize the allegations against Kelly before charges, saying it potentially showed bias against the singer.

Foxx was speaking to reporters after watching a Lifetime documentary examining a history of abuse allegations Kelly, and she made an appeal for any victims to come forward.

One Chicago defense attorney, Phil Turner, said he didn’t think the new case would be a legal slam dunk, saying cases of alleged abuse dating back 20 or even 10 years raise questions about the accuracy of memories. He also said he was concerned Kelly was targeted by prosecutors primarily because of recent media attention, including the documentary.

“If he really is a serial predator, there should be something more recent, right?” he said. “Why not look for those? You could then at least use the old allegations to corroborate the new stuff.”

Turner also said Foxx opened herself up to accusations of poisoning the potential jury pool by commenting on the allegations in January.

Kelly’s across-the-board acquittal in 2008 stunned many legal observers, and a future Kelly trial team may try to use similar defense strategies.

Prosecutors then faced high legal hurdles they ultimately could not surmount, despite what appeared to be compelling video evidence. While grainy, it was otherwise good quality and the man appeared to be Kelly.

Defense lawyers in 2008 focused on Kelly’s insistence that the man in the video was not him. They showed jurors that Kelly has a large mole on his back but played excerpts of the video in which a mole was not visible on the man appearing on the screen.

One of Kelly’s attorneys, Sam Adam Jr., told jurors during closings there was no mole on Kelly’s back and that meant one thing: “It ain’t him. And if it ain’t him, you can’t convict.”

Kelly’s alleged victim, who by then was around 23, did not testify. She denied before trial that she was on the video. Instead, prosecutors relied on friends of hers and four relatives to identify her as the girl in the video. Prosecutors also called on Kelly acquaintances who said the man in the video was clearly Kelly.

Jurors who spoke to reporters after the trial ended said they had difficulty convicting someone when the alleged victim didn’t testify. One said jurors had reasonable doubts about the identity of the people in the video.

“What we had wasn’t enough,” said one juror.