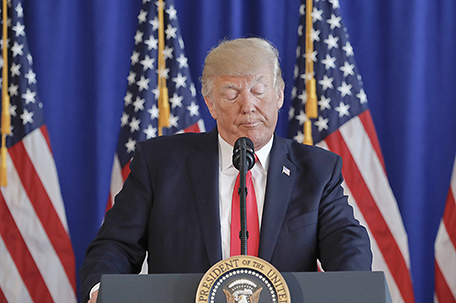 WASHINGTON — Flush with cash, President Donald Trump’s campaign is stepping up its outreach to Black Americans as it tries to claw away support from the traditionally Democratic voting bloc ahead of November’s general election. Trump’s campaign announced recently that it is opening 15 “Black Voices for Trump Community Centers” in the coming weeks in major cities in battleground states.

“While the other side is focused on beating up each other, we’re focused on growing the party,” said Trump senior adviser Jared Kushner. “You’re never going to get the votes you don’t ask for.”

The offices will feature a line of campaign swag adopting the “woke” label, and videos of prominent Trump surrogates like Diamond and Silk explaining their support for the president and pamphlets outlining the president’s record. A spin on the traditional field office, the centers will help spread the world about Trump’s efforts on criminal justice reform and support for historically Black colleges and universities. They will also showcase the overall state of the economy under Trump. Unemployment for Black Americans has hit record lows in recent months.

The Republican campaign faces significant hurdles as it tries to curry favor with Black voters. Approval of Trump among Black Americans has been consistent at about 1 in 10 over the course of his presidency. A Pew Research Center analysis of people who participated in its polls and were confirmed to have voted showed Trump won just 6% of Black voters in 2016. But the campaign claims it is seeing an uptick of support among Black men in particular — and notes that even a small shift in the electorate could decide close races.

“Last time it was ‘What the hell do you have to lose?’” said Kushner, who is married to the president’s daughter Ivanka. “Now you show them what they’ve gained from President Trump and what more they can gain if they get four more years of President Trump.”

In Florida, the campaign is opening offices in Jacksonville, Miami, Orlando, Tallahassee and Tampa. In Ohio, Cleveland and Columbus will be represented. In Pennsylvania, offices will open in Philadelphia and Pittsburgh, and in North Carolina they will open in Charlotte, Greensboro and Raleigh. Others will open in Milwaukee, Detroit and Atlanta.

The retail spaces will be the campaign’s first field offices targeted at a specific demographic group, but the campaign said offices aimed at Latino Americans may follow.