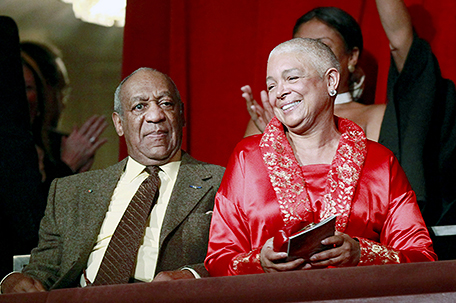 ABOVE PHOTO:  Comedian Bill Cosby, left, and his wife Camille appear at the John F. Kennedy Center for Performing Arts before Bill Cosby received the Mark Twain Prize for American Humor in Washington. Camille Cosby answered questions under oath on Feb. 22, 2016, for 7 to 8 hours in her first deposition since dozens of women came forward over the last year with sexual abuse allegations against her husband.  (AP Photo/Jacquelyn Martin, File)

SPRINGFIELD, Mass. — Bill Cosby’s wife, an enigmatic figure who has publicly stood by her husband despite the dozens of sexual assault allegations against him, was deposed last Monday in a defamation lawsuit filed against him by seven accusers.

The deposition, believed to be the first she has given since dozens of women came forward to accuse him of sex assault, was given under heavy security at the Springfield Marriott. Hotel staff cordoned off the area of the hotel near the conference room where Cosby gave her deposition and later pulled heavy draperies across the hallway so no one could see the door to the room.

Depositions in civil cases are typically given in private, with only the people being deposed, their lawyers and a stenographer in the room. Written transcripts of depositions are generally sealed from public view because they are considered discovery materials shared between lawyers on both sides. But depositions can sometimes become public when they are attached to support a motion in the case.

Camille, 71, has been married to Bill for 52 years. She has also been his business manager.

After numerous women went public with sexual assault allegations against her husband, Camille Cosby issued a supportive statement, calling him “a kind man, a generous man, a funny man, and a wonderful husband, father and friend.”

She also suggested that her husband, not the women, was the party being harmed.

“None of us will ever want to be in the position of attacking a victim,” she said. “But the question should be asked — who is the victim?”

Lawyers for the Cosbys have argued that she does not have any information on the accuracy of the women’s claims and that her conversations with her husband are confidential under the Massachusetts marital disqualification rule. They attempted to quash the deposition.

A judge had ruled Friday that Camille Cosby’s deposition must proceed. However, defense lawyers filed an emergency motion late Saturday requesting it be delayed, saying she “has had no involvement with the facts or allegations underlying this case.” They argued her public testimony would create “an unnecessary media circus and personal security threat that serves no purpose other than to harass and embarrass her.”

In a ruling late Sunday, a judge said Monday’s deposition can take place.

The Cosbys have a home in Shelburne Falls, about an hour’s drive from Springfield, where the lawsuit was filed. They have five children, one of them deceased.

A lawyer for the women argued that because Camille Cosby has been the TV star’s wife and business manager, she could have useful information.

The plaintiffs in the Massachusetts defamation case are among about 50 who have accused Bill Cosby of sexual misconduct.

In December, Cosby, 78, was charged in Pennsylvania with drugging and sexually assaulting a former Temple University employee at his suburban Philadelphia home in 2004. Cosby has pleaded not guilty. This month, a judge denied a motion by Cosby’s lawyers to dismiss the charges. A preliminary hearing is scheduled for March 8.

Cosby’s lawyers have said in court papers that the deposition is “nothing more than a thinly veiled attempt to pressure (the) defendant in the face of subjecting his wife to the shame and embarrassment of responding to questions about his alleged infidelities and sexual misconduct.”