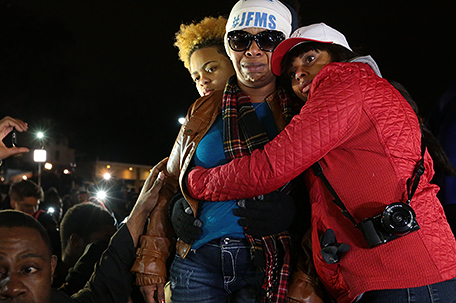 ST. LOUIS — Michael Brown’s mother says it has been a “sleepless, very hard, heartbreaking and unbelievable” time for her since the announcement that a grand jury didn’t indict Ferguson police Officer Darren Wilson for killing her son.

Lesley McSpadden said during an interview on NBC’s “Today” show Wednesday that she also felt that Wilson’s description of her son as looking demonic during their Aug. 9 confrontation was disrespectful and “added insult to injury.”

McSpadden said she hadn’t seen video of her husband, Brown’s stepfather Louis Head, yelling “Burn this bitch down” to angry protesters after the grand jury decision was announced Monday night.

She says the crowd “was already stirred” up by that point and that she holds the authorities, not her husband, for the violent night of protests.

Watch the McSpadden interview on “The Today Show” in it’s entirety at http://www.today.com/news/michael-browns-mom-reacts-darren-wilsons-first-public-comments-insult-1D80318754.