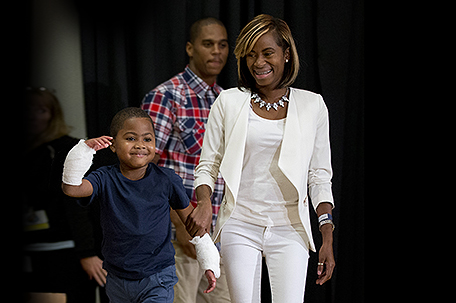 ABOVE PHOTO:  Double-hand transplant recipient eight-year-old Zion Harvey arrives to a news conference with his mother Pattie Ray Tuesday, July 28, 2015, at The Children’s Hospital of Philadelphia (CHOP) in Philadelphia. Surgeons said Harvey of Baltimore who lost his limbs to a serious infection,  has become the youngest patient to receive a double-hand transplant.  (AP Photo/Matt Rourke)

An 8-year-old boy who lost his hands and feet to a serious infection has become the youngest patient to receive a double-hand transplant, surgeons said Tuesday.

Zion Harvey’s forearms were heavily bandaged but his hands were visible as he flashed some big smiles Tuesday at a hospital news conference. He demonstrated his still-delicate grip and described waking up with new hands as “weird at first, but then good.”

The boy, from the Baltimore suburb of Owings Mills, Maryland, received the transplant earlier this month at The Children’s Hospital of Philadelphia, though doctors did not publicly disclose the nearly 11-hour operation until this week.

“He woke up smiling,” said Dr. L. Scott Levin, who heads the hand transplant program. “There hasn’t been one whimper, one tear, one complaint.”

Zion, a bright and precocious child Levin described as having “a maturity that is way beyond his 8 years,” contracted sepsis as a toddler. The resulting multiple organ failure forced the amputation of his hands and feet; by age 4, he needed a kidney transplant, receiving the organ from his mother.

Leg prosthetics have allowed Zion to be very active, including walking, running and jumping. He learned to use his forearms to write, eat and play video games and has been attending school. Physicians hope he’ll now be able to achieve more milestones, including his goals of throwing a football and playing on the monkey bars.

“It was no more of a risk than a kidney transplant,” his mother, Pattie Ray, said. “So I felt like I was willing to take that risk for him, if he wanted it — to be able to play monkey bars and football.”

Several adults in the U.S. have received double-hand or double-arm transplants in the past few years. Hospital officials in Philadelphia believe Zion is the youngest person to have the surgery, which requires a lifetime of immune-suppressing drugs to ensure the body doesn’t reject the new hands.

Zion already had been taking anti-rejection drugs because of his donated kidney, which made him a good candidate for the hand transplant, doctors said.

Doctors say Zion will spend several weeks in physical rehab at the hospital before returning home. Two rows of relatives attended the news conference, and they stood to be recognized at Zion’s request.

“I want to say to you guys, thank you for helping me through this bumpy road,” he said.

Children’s Hospital said it would not hold Zion’s family liable for any costs beyond that which may be covered by medical insurance.

Report: Transplant may have cured man of AIDS