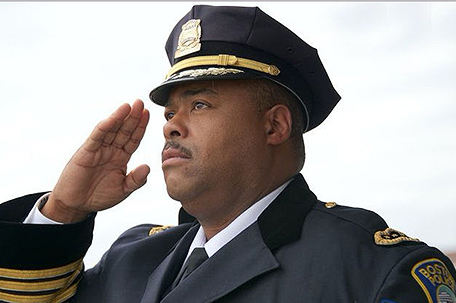 Calling it a historic occasion, Democratic Mayor Marty Walsh administered the oath of office to Gross in front of a standing-room only crowd of about 900 people at the Morning Star Baptist Church.

As the crowd cheered, Gross took off his new badge and put it around the neck of his mother, who’s been a member of the church for 35 years. At one point, someone in the crowd shouted “This is history!”

“I know that Dr. Martin Luther King is looking down today and smiling at the realization of one of his dreams: that a man is not judged by the color of his skin by the content of his character,” said Randall Halstead, a retired police superintendent.

Gross takes over for William Evans, who left after nearly 40 years in the department to become the police chief at Boston College. Gross, who joined the police force in 1985, served as Evans’ second-in-command and has long been a public face of the department.

Gross said his four goals will be to strengthen community policing initiatives, work toward diversifying the department, promote transparency and ensure his officers are sound in “body and mind.”

“We want every child in every part of this city to feel welcome to put on the uniform,” Gross said. “We have work to do, but one day everybody will feel comfortable, and until then we won’t waver, we won’t grow tired.”

Gross said he never would have believed when joined the department more than three decades ago that he would one day become its leader, calling what he had to break through “not a glass ceiling, but a brick ceiling.”

“Look how far we come and what we have become,” he said.