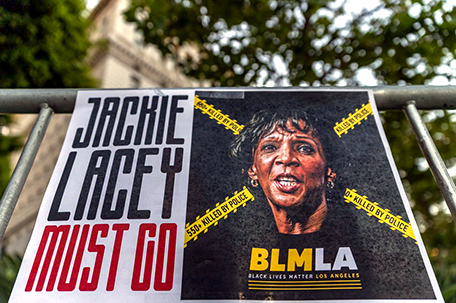 ABOVE PHOTO: In this June 6, 2020, file photo, a banner posted by Black Lives Matter Los Angeles, BLMLA, members reads “Jackie Lacey must go,” as protesters hold a peacefully rally outside outside the Hall of Justice building in Los Angeles. Protests over the death of George Floyd are being felt in the race to see who will run the Los Angeles district attorney’s office. Chants of “Jackie Lacey must go!” echoed between the courthouses downtown several days this month. (AP Photo/Damian Dovarganes, File)

LOS ANGELES  — For nearly three years, Melina Abdullah has led dozens of demonstrators once a week outside the Hall of Justice to call for the ouster of Los Angeles County District Attorney Jackie Lacey for failing to prosecute killings by police officers.

Chants of “Jackie Lacey must go!” echoed between the courthouses downtown several days this month. Demonstrators hoisted signs saying, “Prosecute Killer Cops” and “Bye Jackie!” and read the names of some of the more than 340 people killed by LA County law enforcement officers during the eight years Lacey has been DA.

In every case but one Lacey has found a shooting justified or decided not to bring charges because she concluded the officer could win an acquittal at trial.

“Everybody is utterly shocked when they think about the number of people who have been killed by police or while in custody since Lacey took office,” said Abdullah, co-founder of Black Lives Matter-LA. She criticized Lacey’s substantial financial support from law enforcement organizations for appearing to be “a quid pro quo.”

Lacey is the first Black person and woman to serve as Los Angeles district attorney. She is seeking a third term in November and has taken note of the recent crowds, saying “the weight of them and the number of people is substantial, to say the least.”

But she is less concerned about the impact of demonstrations than about being misunderstood.

“I don’t want people thinking I’m biased or racist or afraid, or any of these very unflattering things that are said,” Lacey told The Associated Press. “We shouldn’t assume that everyone who says ‘Black lives matter’ isn’t concerned also about public safety. That’s a false choice that those are mutually exclusive.”

Lacey fell just shy of getting the majority of votes needed to get re-elected in a March primary against two contenders running to the left of her on platforms to reform the criminal justice system. She faces a runoff against George Gascon, the former San Francisco district attorney and longtime Los Angeles police commander, who was a distant second.

The death of Floyd, a Black man who cried out that he couldn’t breathe as a white Minneapolis officer pressed a knee to his neck for over eight minutes, has ignited protests across LA for more than three weeks. Protesters want dramatic reforms to the criminal justice system, and that demand could shape the DA’s campaign.

Lacey, who grew up in South Los Angeles and worked her way up through the ranks in the nation’s largest local prosecutor’s office, is seen as the institutional law-and-order candidate. Gascon, who immigrated to LA from Cuba as a teen, has billed himself as a progressive reformer.

Gascon has not joined the protests, but quickly condemned the death of Floyd and police abuses. He has tweeted and issued press releases supporting rights of protesters and denouncing their arrests for curfew violations while calling on Lacey to continue not seeking bail in low-level, nonviolent criminal cases after a statewide order imposed during the coronavirus pandemic was rescinded.

Lacey didn’t issue a statement until six days after Floyd was killed and has been a step behind Gascon in announcing she won’t prosecute curfew violators and will continue to not seek bail for less serious offenses.

“She is so obviously reacting to the political pressure of the election,” Gascon said. “But the motivation behind that is not driven by her concerns and her desire to be thoughtful and humane but they’re really motivated by campaign politics which tells me that if she were to be re-elected she would go back very quickly to being who she’s always been.”

Gascon’s campaign, which was largely funded in the primary by outside contributions from a pair of wealthy Northern California donors, has seen a spike of interest since the protests started. He’s got 200 new volunteers and raised over $160,000, mostly in donations averaging $20, according to his campaign.

Lacey, who got most of her primary support indirectly from police unions, has criticized Gascon for not prosecuting police for shootings during his time as San Francisco DA, though his spokesman, Max Szabo, said none of those cases involved unarmed suspects.

The union representing Los Angeles Police Department officers spent $1 million to torpedo Gascon in the primary as a “con man” and failed leader who fled San Francisco before his term expired. He’s been criticized for authoring a law that reduced some felonies to misdemeanors, not charging enough misdemeanor cases and for a steep rise in San Francisco property crimes, mostly car break-ins.

Violent crime in San Francisco during his tenure rose 15%, though it jumped 31% in Los Angeles County during most of Lacey’s time in office, according to a Los Angeles Times analysis.

Lacey points to her record prosecuting two dozen officers for unlawful use of force and for currently being the only DA in the state to have a case pending against an officer in a killing — a manslaughter charge against a sheriff’s deputy.

Having law enforcement support at a time when protesters are calling for defunding police could hurt Lacey, said Eric J. Miller, a criminal law professor at Loyola Law School.

“Before it used to be a net positive in the days of law and order, and by that I mean two months ago,” Miller said. “But now, ‘I’m supported by the police union’ or more possibly Black Lives Matter saying, ‘The police union supports Lacey,’ is a very different signal.”

Lacey has been criticized for not bringing charges in several high-profile police killings of unarmed suspects, including one involving Brendon Glenn, a Black homeless man who had accosted patrons of a bar in Venice and was shot as he struggled with officers who were trying to handcuff him. Then-LAPD Chief Charlie Beck had called for criminal charges in the case, but Lacey said she didn’t think she could win a conviction.

Tyrone Howard, an education professor who heads the Black Male Institute at the University of California, Los Angeles, said that given the “long ugly history” LAPD has had with Black and Latino communities, there was hope Lacey would be different from her predecessor, who never charged an officer with an on-duty shooting.

From the standpoint of holding police accountable, he said: “I think there’s been widespread disappointment that with her as an African-American, the first who has been in that seat, that that has not happened to the degree that people think that it should have,”

Lacey said Floyd’s death has forced her to consider dusting off an idea she shelved to remove police departments from investigating their own officers in shootings, though she knows that will not be popular with chiefs.

Lacey said she’s tried to have discussions with Black Lives Matter, but the members want to meet in larger forums, where she has been heckled and shouted down.

Protesters even showed up at her doorstep before dawn the day before the March primary, prompting Lacey’s husband to pull a gun on Abdullah and threaten to shoot. The incident is under investigation by the state attorney general.

Black Lives Matter does not endorse candidates and Abdullah won’t say she will support Gascon.

“We can’t say that because we’re going to have to protest him too, I’m sure,” Abdullah said. “I just know that it’s impossible to be worse than Lacey.”