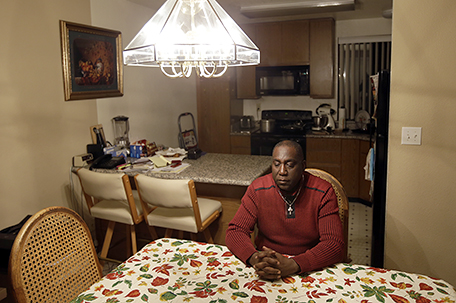 ABOVE PHOTO:  Pastor Yul Dorn poses for a portrait inside his home, where he’s facing eviction due to foreclosure in San Francisco’s Bayview-Hunters Point district. As San Francisco rides a massive building boom, fueled largely by growth in tech-based jobs, many African-Americans worry they will not be able to afford to stay in a neighborhood they’ve long called home. (AP Photo/Marcio Jose Sanchez)

SAN FRANCISCO  — Yul Dorn and his wife raised their son and daughter in a three-bedroom home crammed with family photos, one they bought in a historically African-American neighborhood in San Francisco more than two decades ago.

Today, the couple is living in a motel after they were evicted last year, having lost a foreclosure battle. A second home they inherited is also in default.

The Dorns expect to join the growing ranks of African-Americans who do not own their homes, a rate that was nearly 30 percentage points higher than that of Whites in 2016, according to a new report.

“The person who bought the house, we lost all of our memories,” said Dorn, a pastor and case manager with the city health department. “He put the furniture out on the street, and it was just devastating to my family.”

The nation’s homeownership rate appears to be stabilizing as people rebound from the 2007 recession that left millions unemployed and home values underwater, according to the report by Harvard University’s Joint Center for Housing Studies. But it found African-Americans aren’t sharing in the recovery, even as Whites, Asian-Americans and Latinos slowly see gains in home-buying. The center said the disparity between Whites and Blacks is at its highest in 70-plus years of data.

Experts say reasons for the lower homeownership rate range from historic underemployment and low wages to a recession-related foreclosure crisis that hit Black communities particularly hard. In 2004, the pinnacle of U.S. homeownership, three-quarters of whites and nearly half of Blacks owned homes, according to the Harvard study.

Now, a lack of affordable housing and stricter lending are making it harder for first-time buyers to obtain what traditionally has been considered an essential part of the American dream and a way to build wealth.

“It has always been historically and systemically harder for Blacks, and we were seeing there a little bit of progress, and now we’re back at square one,” said Alanna McCargo, co-director of the Housing Finance Policy Center at the Urban Institute, a think-tank focused on inner-city issues that published a similar report.

An AP analysis of U.S. Census Bureau statistics shows some pockets of the Midwest and California had the lowest homeownership rates for African-Americans, while some areas of the South had the highest.

Low inventory adds to the problem, said Jeffrey Hicks, incoming president of the National Association of Real Estate Brokers, which was founded in 1947 to promote fair housing opportunities for minorities. The Atlanta area has only about 30,000 properties for sale through real estate agents, compared with approximately 100,000 about 13 years ago, he said.

“You had subdivisions going up everywhere in terms of newer homes,” Hicks said. “We haven’t seen that resurgence of new housing stock.”

African-Americans snapped up homes at the peak of the housing bubble, lured by generous lending and a glut of affordable properties, housing experts say. Lenders also targeted minorities, pushing riskier subprime loans even when applicants qualified for lower-interest loans.

Graciano de La Cruz, 70, grew up in San Francisco, the child of a Filipino father and an African-American mother. In 1960s, the city condemned his mother’s house for redevelopment in the historically Black Fillmore neighborhood. She was given a housing voucher and became a renter, losing any equity she could have passed to her children.

He and his wife, Buena, who is Filipino-American, must now sell their own home of two decades to pay off a debt that stemmed from a “pick-a-payment” loan with World Savings Bank in August 2006.

They asked for a loan with a fixed rate, but the lender said an adjustable rate package would meet their needs. The initial monthly payment for the pick-a-payment loan was about $1,700.

Then her health declined, and he lost his job. In 2014, Wells Fargo, which had purchased World Savings, issued a notice of default. By then, the monthly payments had mushroomed to roughly $3,000.

“I can’t sleep,” de la Cruz said. “I fear I might get a knock on the door, and the banker will come up with sheriff’s agents talking about, ‘You got to leave now.’”

The pick-a-payment loans drew wide government scrutiny. In 2010, Wells Fargo agreed to pay $24 million to end an investigation by eight states, including California, into whether lenders later acquired by the bank made unsustainable mortgages without disclosing the terms.

Wells Fargo has vowed to help create more than 250,000 new African-American homeowners to address declining homeownership. But spokesman Alfredo Padilla said the bank could not find a way to help the couple.

Dorn, the 60-year-old pastor, says Chase misapplied a payment he made in 2008 and then failed to keep proper records. He made several payments on a modified trial loan, which the bank then denied.

Chase spokeswoman Suzanne Alexander said foreclosure is always the last option, pursued only when other avenues are exhausted.

Yet there are bright spots in the home-owning front.

The New Haven metro area in Connecticut, for example, reported an increase in Black homeownership from 2010 to 2015. Georgia’s Albany area, which is predominantly African-American, saw a 15 percent increase from 2005 to 2015.

And in Jacksonville, Florida, 32-year-old Natasha Jones recently bought her first home, a three-bedroom listed at $135,000. The single mother of three worked with a member of the nonprofit NeighborWorks America, which supports community development, to clear up her credit and save for a down payment on a Wells Fargo-financed loan.

“I am my mom’s first child to own my home,” Jones said. “Now that we’re in our own place, I’m redoing the flooring the way I want to. I’m painting the kids’ walls. It’s ours.”

Modern home-design trends are set to revolutionize the housing market