Black dads are overcoming obstacles for self, children and community (part one) 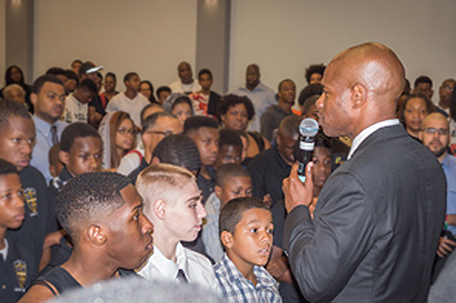 LOS ANGELES – Black men in America face high unemployment, mass incarceration, and homelessness, yet they defy those odds every day to be good fathers to their children and do good in their communities.

According to estimates from the U.S. Census Bureau, Black males were 48 percent of the 21.5 million Blacks as of 2013.  Black women make up 52 percent of that population.

Challenges like the shrinking Black male population and lack of jobs are roadblocks for men who want to be active in their children’s lives and their communities. So Black men who are doing well must pull double duty to help raise sons and daughters whose fathers aren’t present, said Deric Muhammad, a Houston-based activist who works to empower fathers and young men.

“What made me want to give back is just me sitting back and reflecting on the circumstances that I came from,” Muhammad said.

Muhammad’s father died when he was 11 years old. His mother had a very bad drug problem for the better part of his childhood and he and his siblings often moved from house-to-house, and he became engaged in some criminal activity as a directionless youth.

“But, I believe that if God can bring me out of it, he can bring anybody out of it,” Muhammad said. That premise compelled him to launch Project Forward to reach out and give back to disadvantaged youth in urban America, particularly Houston.

He and other men mentor young boys through the initiative. He wanted to pour into those youth the manhood and other lessons he’s learned from his studies in the Nation of Islam under Minister Louis Farrakhan’s leadership.

Since it began in 2015, Project Forward has offered mentorship programs that include lessons in auto mechanics and soon, computer coding.

Last year, it hosted its first Day of Encouragement for Black Fathers in MacGregor Park in Houston on Fathers’ Day. Hundreds turned out to support it, including special guest speaker Student Minister Nuri Muhammad of Mosque No. 74 in Indianapolis.

The event featured games and balloon bouncers for children and football and basketball tournaments. But fathers were the highlight. “What we tried to do was create an environment where even if a father didn’t have any money, he could just grab his son or daughter and bring them to the park and just have a good time, and we paid for everything,” Muhammad said “We call it a day of encouragement for Black fathers, and it came out of the observation that Mothers’ Day in the Black community literally rivals Easter. Literally. But Fathers’ Day not so much.”

Father’s Day tends to be seen as more of a day of pain when compared to the joyful celebrations of Mother’s Day, Muhammad said.

“Look at the rate Black men are killed in America. Many of them were fathers. Many of them are dead,” he said. “Look at the rate that Black men are unemployed in this country … at double the national average and that affects our ability to provide for our children. And unfortunately, some of us, if we can’t provide financially, we don’t think very much of ourselves as fathers, so we just stay away.”

For Marc Simon, incarceration added to his struggles to be a parent. The author, a husband and father of two, spent 12 years in prison. When he went in, his daughter was 7. When he came home, she was 19.

“When I got out, I came looking for my little girl, but my little girl is now a grown woman or approaching grown woman status,” Simon said. People assumed he was going to exit prison in search of a woman, but for the first six months he didn’t even date and there was no balance, he said.

“There was just a father who missed his daughter and a daughter who grew up without her dad, and it tested desire on both of our parts to reach into the relationship. It’s hard to swallow, but those years are gone,” Simon said.

Sometimes, entire years would pass before Simon would see his child due to where she lived, he said. It was a trying time.

“I would be lying if I told you that I didn’t go through a lot of depression, a lot of anger,” he said.