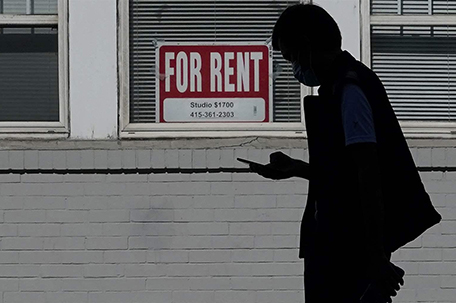 May 21, 2021 Category: Week In Review Posted by: Philadelphia Sun Staff

ABOVE PHOTO: A man walks past a “For Rent” sign in San Francisco. President Joe Biden wants to add some 200,000 Section 8 vouchers but housing advocates and critics say the rental assistance program is flawed and allows discrimination. States and localities are increasingly enacting protections for voucher-holders. (AP Photo/ Jeff Chiu)

Stateline, an initiative of The Pew Charitable Trusts((www.pewtrusts.org)

President Joe Biden wants to expand Section 8 housing assistance to more than 200,000 additional families. The administration proposed an additional $5.4 billion in hopes that housing vouchers will help low-income people at risk of homelessness because of the pandemic.

But the challenge for many voucher-holders is finding landlords willing to accept them.

Robinson, 62, has used a federal housing voucher to cover two-thirds of her rent. For the past three years she’d been living at an apartment complex in south Dallas, but last month her landlord refused to fix a leaky water heater and failed a yearly inspection required under Section 8.

The local housing authority told her she had two weeks to find a new home.

“I nearly ended up homeless because I couldn’t find an apartment,” said Robinson, a Black woman who raised five children on her own. “They say they have availability but as soon as I ask if they take Section 8, suddenly those vacancies disappear.”

Bidens’s 2022 spending request is expected to be submitted to Congress for approval in the next few months.

Nationwide, more than 2.2 million households receive federal subsidies through the Housing Choice Voucher Program. The program, established in 1974 under Section 8 of the U.S. Housing Act, is meant to fill the gap between what families can afford to pay and local rents. But under federal law, landlords are free to reject tenants with vouchers.

An increasing number of states and cities are stepping in to help.

More than a dozen states have enacted so-called source-of-income laws that bar landlords from rejecting prospective tenants because they plan to use housing aid to pay the rent. Five of the states have acted in the past three years, according to the Poverty and Race Research Action Council, a civil rights and policy organization based in Washington, D.C. More than a hundred localities have similar laws.

But these laws have been contentious, and not all states are moving in the same direction. Rhode Island last month became the latest state to enact a statewide source-of-income law. But two weeks later, Iowa moved in the opposite direction, through a law banning localities from passing protections for voucher-holders.

Critics argue that source-of-income laws unfairly force property owners to participate in a supposedly voluntary program that they say is inefficient and costs them thousands each year in lost income. An ongoing battle in Texas over a state law that bars local source-of-income laws illuminates the issues.

She said that while these are protected classes, landlords often discriminate against voucher-holders, who are mainly women of color, by setting rent above the fair market values set by the U.S. Department of Housing and Urban Development every year, or by outright refusing to accept vouchers.

“Saying they don’t accept vouchers is all a proxy for race,” Rosales said in an interview. “I’ve heard of landlords who say, ‘They have a different lifestyle than the people that we want living here.’”

Data from the Department of Housing and Urban Development shows that 48% of voucher-holders were Black, 32% were White, 17% were Hispanic and 2% were Asian in 2017.

To Be Equal: School vouchers are a failed experiment