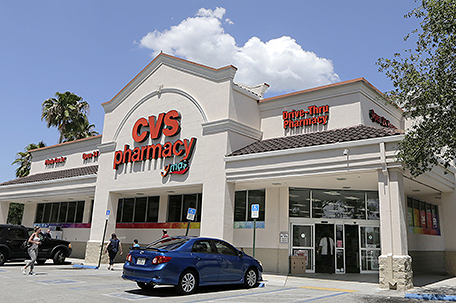 CVS Health wants to do much more than fill your prescription or jab your arm with an annual flu shot.

The second-largest U.S. drugstore chain is buying Aetna, the third-largest health insurer, in order to push much deeper into customer care. The evolution won’t happen overnight, but in time, shoppers may find more clinics in CVS stores and more services they can receive through the network of nearly 10,000 locations that the company has built.

“They’ll be pretty much a soup-to-nuts health company … except for the hospital part of it,” said Craig Johnson, president of Customer Growth Partners, a retail consulting and research firm.

Patients also may find the CVS-Aetna combination much more involved in managing their care, especially for those with expensive chronic conditions like diabetes. The bulked-up company also may gain more negotiating leverage over prescription drug prices, but it’s far too early to say how much or whether that benefit will trickle down to customers.

The $69 billion deal announced Sunday evening will push the drugstore chain more forcefully in a direction it has been heading for years, according to Wall Street analysts. The company, which stopped selling tobacco products in 2014 to further burnish its image as a care provider, already runs about 1,100 clinics and has been steadily expanding the health care it offers.

The clinics started off as a place to treat basic health care needs like sinus infections or strep throat. Gradually, CVS added services like blood draws or monitoring of chronic conditions such as high blood pressure and diabetes. Expect that trend to continue as the drugstore switches more from selling products in its stores to services that can’t be bought online, where retailers face formidable competition from the likes of Amazon.

“I think over time you’re going to see less of that front-store retail and more health care services in their stores,” said Jeff Jonas, a portfolio manager for Gabelli Funds who follows drugstores.

The mammoth acquisition pairs a company that runs more than 9,700 drugstores with an insurer covering around 22 million people. CVS Health Corp. is also one of the nation’s biggest pharmacy benefit managers, processing more than a billion prescriptions a year for clients like large employers and insurers including Aetna Inc.

Analysts say the combined company could add more clinics and expand in-store services to include eye care or maybe centers for hearing aids. That could gradually turn CVS into a one-stop-shop for health care, a place where patients can get a hearing aid checked, then see a nurse practitioner and pick up prescriptions.

“If you think about it, we actually don’t have anything like that,” said Jefferies analyst Brian Tanquilut said.

Clinics aren’t especially profitable, but they are important because they draw people into the stores and help build deeper customer relationships, analysts say.

The clinics have become an attractive option for customers in need of basic health care because they are usually open longer than the family doctor’s office. A clinic visit also can be cheaper than a $100 doctor visit for someone who doesn’t have insurance, but they have drawbacks. Family doctors say they know their patients better and can check on their overall health during a visit rather than dealing with just the one issue that brought that person in.

Some CVS shoppers also are skeptical about getting their health checked in a retail store.

Jessy Tatenco, 23, buys household items and over-the-counter medications for his three children at CVS. But he said would be reluctant to get medical services there. He feels more comfortable in a doctor’s office or traditional clinic setting.

“I wouldn’t trust them with my health care. They sell toys,” he said after leaving a CVS store Sunday in downtown San Diego.

CVS isn’t the only health care giant delving into clinical care. The deal will help it compete with others like UnitedHealth Group Inc. The nation’s largest health insurer also runs clinics and doctor’s offices. Like CVS, it also has one of the nation’s largest pharmacy benefit management businesses.

CVS and Aetna also want to go beyond just clinic visits to help patients and customers.

Aetna Chairman and CEO Mark Bertolini has talked frequently about how most of a person’s life expectancy is determined by genetics and location and not by clinical care, which is where health care spending is focused.

“Our conventional operating model is not effective,” Bertolini said earlier this year. “People are angry at this model. It doesn’t work effectively in controlling costs.”

He has talked about the need to get into patients’ homes to gauge what they need, like whether they have enough food or may need transportation.

CVS can help through its home infusion business, which sends nurses to patients’ homes to deliver complex drugs for people with hemophilia among other conditions. The clinic and drugstore locations could also give patients with chronic conditions like diabetes more convenient options to get their blood monitored or counseling on their condition.

Over time, health care experts say that can help keep these conditions from growing worse and stave off expensive hospital stays.

CVS will pay about $207 in cash and stock for each share of Aetna. The boards of both companies have approved the deal, and the companies expect the deal to close in the second half of next year.

But anti-trust regulators still need to evaluate it.

The Justice Department said last month that it is suing AT&T to stop its $85 billion purchase of Time Warner. Regulators also sued to stop the Aetna’s approximately $34 billion purchase of rival Humana Inc. — a deal that fell apart earlier this year.

Hartford, Connecticut-based Aetna and Woonsocket, Rhode Island-based CVS both manage Medicare prescription drug coverage. Some of that business may have to be sold to address antitrust concerns. But otherwise, Leerink analyst David Larsen thinks a CVS-Aetna combination has decent odds of getting past regulators, in part because the businesses have little overlap.

Testing for metabolic syndrome: an easy way to get a picture of your overall health