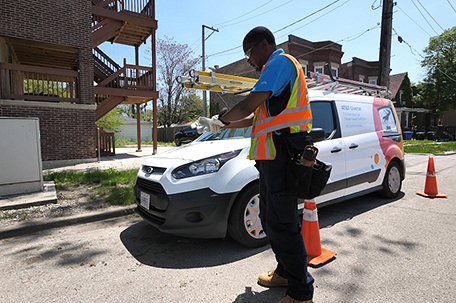 ABOVE PHOTO:  Michael Kerby, a premises technician at AT&T, is one of the company’s 700 employees who live and work in Chicago neighborhoods most affected by gun violence and high unemployment. (Photo: AT&T)

“We want to improve lives and lift Chicago neighborhoods that have suffered due to negative elements in the community,”  — John Donovan, CEO, AT&T Communications.

By News One Staff

In an effort to make change in Chicago communities plagued by poverty and violence, AT&T has launched a new initiative to bring more employment opportunities to the city, Crain’s Chicago reported.

The project — dubbed “Believe Chicago”— was created as an avenue to drive job creation for underserved individuals, the news outlet writes. Through the initiative, AT&T has allocated $2 million to nearly 20 non-profit organizations throughout the Chicago area. The company has also hired over 400 individuals at their Chicago Platinum Customer Care Center and other stores. “We started thinking about our philanthropy, fully recognizing the challenges in areas affected by gun violence,” Paul La Schiazza, president of AT&T Illinois, told the news outlet. “We started digging deep — how could we use human capital and assets to improve those communities?”

John Donovan, CEO, AT&T Communications, told Black Enterprise that AT&T is a part of the fabric of Chicago and that this effort is being led by employees who live and work in communities that are impacted by these issues. “Through their existing efforts, we have gotten more engaged and they have inspired the company to bring more assets to help. They’re passionate about wanting to do more and we’re committed to supporting their efforts,” he said. “We want to improve lives and lift Chicago neighborhoods that have suffered due to negative elements in the community. We’re working with employees and community leaders to address some root causes by promoting hiring, training, and opportunity—and making sure the good news gets out along the way.”

Crain’s Chicago reports that the company employs nearly 5,000 people in the Cook County area. The company is currently working on a documentary titled “Beacon of Hope” that highlights the stories of individuals working to evoke change in their communities.