Attorney: Black man killed by deputies shot in back of head 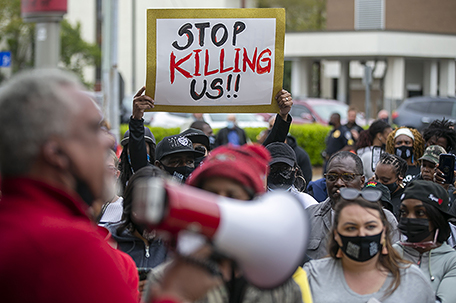 ABOVE PHOTO: Kirk Rivers addresses demonstrators outside City Hall as they await members of the city council who held an emergency meeting on Friday, April 23, 2021, in Elizabeth City, N.C., in regards to the death of Andrew Brown Jr., who was shot and killed by a Pasquotank County Deputy Sheriff earlier in the week. (Robert Willett/The News & Observer via AP)

By Ben Finley And Jonathan Drew

ELIZABETH CITY, N.C. (AP) — A Black man killed by deputies in North Carolina was shot in the back of the head and had his hands on his car steering wheel when they opened fire, attorneys for his family said Monday after relatives viewed body camera footage.

Attorney Chantel Cherry-Lassiter watched a 20-second portion of body camera video with the family of Andrew Brown Jr., who was killed Wednesday by deputies serving drug-related search and arrest warrants. Lassiter said Brown did not appear to be a threat to officers as he backed his vehicle out of his driveway and tried to drive away from deputies with guns drawn.

“He was not threatening them in any kind of fashion,” she told reporters at a news conference.

When asked whether Brown was shot in the back, attorney Harry Daniels said, “Yes, back of the head.”

An eyewitness account and emergency scanner traffic had previously indicated Brown was shot in the back as he tried to drive away.

Lassiter, who watched the video multiple times and took notes, said the shooting started as soon as the video began and that she lost count of the number of gunshots. She said she counted as many as eight deputies in the video, some wearing tactical uniforms and some in plainclothes.

“They’re shooting and saying ‘Let me see your hands’ at the same time,” she said.

The family’s lawyers also criticized local authorities for sharing only 20 seconds of the video and only from a single body camera.

Brown’s death prompted days of protests and calls for the public release of body camera video. Civil rights leaders decried that warrants should not lead to a fatal shooting.

Earlier Monday, a search warrant was released that indicated investigators had recorded Brown selling small amounts of cocaine and methamphetamine to an informant. Crump argued that authorities were trying to release negative information about Brown while shielding themselves by holding back the video.

The warrant was sought by Wooten’s office and signed by a judge to allow the search of Brown’s Elizabeth City home. It said that an investigator in nearby Dare County was told by the informant that the person had been purchasing crack cocaine and other drugs from Brown for over a year. The informant described purchasing drugs at the house that was the target of the search.

In March, according to the warrant, narcotics officers used the informant to conduct controlled purchases of methamphetamine and cocaine from Brown on two separate occasions. The warrant said both drug transactions were recorded using audio and video equipment.

The search warrant said investigators believed Brown was storing drugs in the home or two vehicles. The document, which indicated the search was not completed, did not list anything found.

Two arrest warrants released last week charged him with possession with intent to sell and deliver 3 grams of each of the drugs.

Calls have been growing to release the body camera footage, which a judge must authorize in North Carolina. Wooten has said he would petition the court to release the footage. A coalition of media organizations have also sought the footage, and city officials plan to do as well.

Also Monday, Elizabeth City officials declared a state of emergency amid concerns about how demonstrators would react to a possible video release. Protests since the shooting in the eastern North Carolina town of about 18,000 have generally been peaceful.

Four deputies involved in killing of Andrew Brown Jr. back on active duty