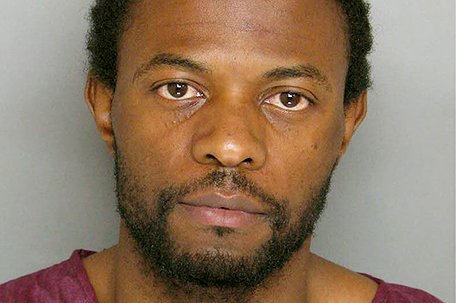 ABOVE PHOTO:  This photo of Vladimir Baptiste was provided by Baltimore County Police. Police announced Wednesday, May 14, 2014 that Baptiste, 28, was charged with three counts of second-degree attempted murder. On Tuesday, Baptiste slammed a stolen landscaping truck into a Baltimore-area television station and was barricaded inside for hours. He is being held at the Baltimore County Detention Center on $750,000 bail.  (AP Photo/Baltimore County Police)

TOWSON, Md. — A man accused of slamming a stolen truck into a television station, then spending hours watching live news footage of the scene before his arrest was charged Wednesday with second-degree attempted murder.

Vladimir Baptiste, 28, of Parkville was taken into custody Tuesday after spending nearly five hours barricaded inside the WMAR-TV station in Towson, watching journalists deliver live reports from just outside the building. Police say no one, including Baptiste, was injured.

Baptiste is charged with three counts of second-degree attempted murder, police said. He also faces charges of first-degree assault, third- and fourth-degree burglary, malicious destruction of property and theft, online court records show. He was being held at the Baltimore County Detention Center on $750,000 bail, and a hearing was scheduled for Wednesday afternoon.

The commotion began around noon Tuesday, when police received 911 calls describing a man demanding to be let in and then reporting that the man had driven a massive landscaping truck into the lobby.

Michael Marion, WMAR-TV’s head of commercial production, was in his office off the station’s lobby when he heard someone rattling violently against the security door. The man claimed “I am God, I am God,” Marion said. But the security guard refused to admit him.

“I heard a series of crashes,” Marion said. “The next thing, I looked in the lobby, and the only thing between truck and the lobby was the final door. I heard one final crash. I looked through the door, and by then the truck was in the lobby.”

WMAR-TV anchor Jamie Costello said a colleague saw the man jump out of the vehicle and run up the stairs. Police said they used a flash bomb and a police dog to help arrest him on the second floor.

“From the beginning it was clear we were dealing with an emotionally disturbed subject,” Johnson said.

The man was holding a golf club when he was arrested, Johnson said. Several sheaths for machetes were also found inside the building, though Johnson indicated they were likely in the truck when it was stolen.

Authorities said they were careful about releasing information as the incident played out Tuesday afternoon because they knew the suspect was watching the news. It turns out police were watching him too, though they did not explain how.

“He was watching different channels, watching you report this story,” Johnson told reporters. “We could view him watching TV.”

Police said 55 people were safely evacuated from the building after the crash, but a single employee remained in the station’s basement throughout the ordeal, updating police. During WMAR-TV’s evening newscast, Nic Hall said he didn’t realize what had happened until he was contacted by a co-worker who was offsite.

“I was in the basement 3 ½ hours talking with police, letting them know the lay of the land,” Hall said.

Carolyn Micheli, vice president of corporate communications for the E.W. Scripps Co., which owns WMAR, said some damage to the building had been fixed by Wednesday. Restoration crews cleaned up glass, fixed doors that had been broken in by SWAT teams and removed rubber bullets that were embedded in walls, Micheli said.

Two sister stations sent about half a dozen people to help produce the news, Micheli said. While the 5 p.m. broadcast was remotely transmitted from Arizona, employees were back in the studio Tuesday night for the 10 p.m. broadcast.