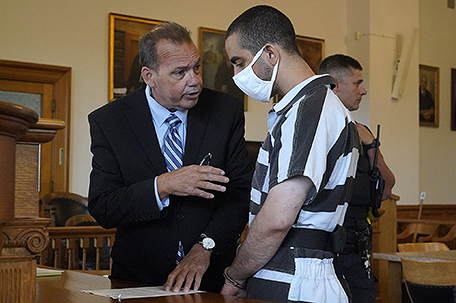 ABOVE PHOTO: Nathaniel Barone, left, defense attorney for Hadi Matar, talks with his client following an arraignment at the Chautauqua County Court in Mayville, NY., on Saturday, Aug. 13, 2022 . Matar, accused of carrying out a stabbing attack against “Satanic Verses” author Salman Rushdie, has entered a not-guilty plea on charges of attempted murder and assault. (AP Photo/Gene J. Puskar)

BEIRUT — The stabbing of author Salman Rushdie has laid bare divisions in Lebanon’s Shiite Muslim community, pitting a few denouncing the violence against fervent followers of the Iran-backed Shiite militant Hezbollah group who have praised the attack. One Rushdie defender received death threats.

The attack struck close to home among Lebanon’s Shiites. The assailant, 24-year-old Hadi Matar, is a dual Lebanese-U.S. citizen, and his father lives in a village in Hezbollah-dominated southern Lebanon. Matar’s mother has said she believes her son’s visit to the village of Yaroun in 2018 turned him into a religious zealot.

The religious edict, or fatwa, urging Muslims to kill Rushdie was issued in 1989 by Iran’s then-spiritual leader, Ayatollah Ruhollah Khomeini, who accused the author of blasphemy for his portrayal of the Prophet Muhammad in the novel “The Satanic Verses.”

Iran, a close Hezbollah ally, has praised last Friday’s attack but denied direct involvement. Hezbollah officials have been tight-lipped since the attack on the 75-year-old Rushdie as he was about to give a lecture in western New York. A Hezbollah official declined comment when contacted by The Associated Press. Rushdie suffered a damaged liver and severed nerves in an arm and in an eye, but was removed from a ventilator last Saturday and able to talk.

Most Lebanese Shiites support Hezbollah and the more secular allied Amal movement of Parliament Speaker Nabih, which won all 27 seats allocated to the sect during this year’s parliamentary elections. Parliament and Cabinet seats are divided in Lebanon in accordance with religious affiliations.

Still, there is a vocal minority of Hezbollah critics among Shiites. Several were attacked and one was shot dead last year.

As the controversy swirled, an old video of Hezbollah leader Hassan Nasrallah resurfaced on social media. In it, Nasrallah said that “no one would have dared to attack Islam’s Prophet Muhammad again” if Rushdie had been killed immediately after the fatwa.

Some Hezbollah critics have accused the group and its supporters of teaching their children to kill in the name of religion.

Matar’s mother, Silvana Fardos, told the local Al-Jadeed TV late Tuesday that her son had lived all his life in the United States until he visited Lebanon for the first and last time in 2018. That trip changed him forever, she said.

“After he returned from Lebanon he was a different human being … I knew that he had a long depression and I was expecting one day to wake up and find out that he had committed suicide,” Fardos said, alleging that her son was mistreated by his father.

Asked if she asked herself whether she had raised a terrorist or an extremist, the mother said: “No. I raised an angel.”

Journalists have been prevented from entering Yaroun, and Matar’s father has not spoken to the media.

Despite Hezbollah’s official silence, the group’s supporters on social media are praising the attack. Some released threats against prominent journalist Dima Sadek after she posted on her Twitter account a photo of Khomeini and Gen. Qassim Soleimani, a top Iranian general killed in a U.S. strike in 2020, describing the two as “satanic verses.”

Since then, death threats on social media and through messages on her cell phone haven’t stopped, with one man warning her, “I will rape you in public,” and another saying that “her blood should be shed.” She received a text message in which the sender told her where she lives.

Sadek said despite the public threats, she has not been contacted by the authorities with offers for protection.

“This is the first time I feel I am in danger,” Sadek, a harsh Hezbollah critic for years, told the AP. She alleged that the social media campaign against her is orchestrated by Nasrallah’s son, Jawad.

She said she is restricting her movements for the first time.The Committee to Protect Journalists urged the Lebanese authorities to launch an investigation and protect Sadek.

Shiite journalist Mohamad Barakat, managing editor of the Asas Media news website, also came under attack after he wrote that by stabbing Rushdie, Matar “stabbed Shiites who live in Europe and America.”

In the other camp, Lebanese journalist Radwan Akil of the renowned local daily An-Nahar said in seemingly contradictory remarks that he condoned the fatwa against Rushdie, but not the killing of anyone, including writers.

“I am of course with political freedoms and freedom of expression … but I’m not for criticizing the greatest man in history the Prophet Muhammad, and I also reject the criticism of Jesus Christ,” Akil said in a televised interview with Lebanese media.

An-Nahar issued a statement, headlined “adopting a call to murder contradicts our policies.” It said that Akil’s views were his own. Two journalists who had worked for the paper and were outspoken critics of Hezbollah and the government of Syrian President Bashar Assad, another Iran ally, were killed in car bombings in 2005.

The debate may eventually fizzle out because most Lebanese are preoccupied with the country’s economic meltdown and lack of services. “They have lots of other concerns,” said Hilal Khashan, political science professor at the American University of Beirut. Lebanese political leaders have not commented on the Rushdie attack.

“Freedom of speech should be polite,” tweeted Mortada, a Shiite minister close to Hezbollah’s allies. “Insults or holding dark grudges has nothing to do with morals.”

Terror Attack in NYC: Truck attack suspect ‘did this in the name of ISIS’

Healing the divisions in postelection America