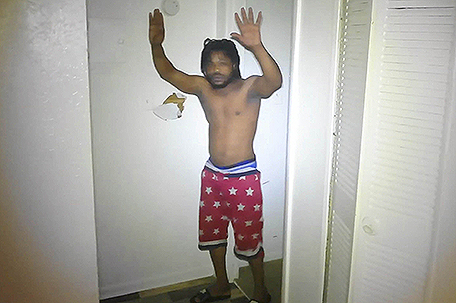 ABOVE PHOTO: Antonio Demetrice Rhynes surrenders to an APD drone with officers outside his apartment in Atlanta. Atlanta police announced Friday that they have arrested Rhynes on a felony murder charge for the shooting death of actor Thomas Jefferson Byrd.  (Atlanta Police Department via AP)

ATLANTA — Atlanta police announced Friday that they have made an arrest in the shooting death of actor Thomas Jefferson Byrd.

Homicide detectives on Wednesday obtained an warrant for the arrest of 30-year-old Antonio Demetrice Rhynes on a felony murder charge based on evidence and tips from the public, and officers arrested him early Friday morning, Officer Steve Avery said in an email.

Rhynes will be taken to the Fulton County jail once he’s processed, Avery said. It wasn’t immediately clear whether he had an attorney who could comment on his arrest.

In drone footage of the arrest released by Atlanta police, the camera enters a second-floor apartment with a damaged front door. It moves through the living room and kitchen and then turns toward a short hallway.

A man pokes his head out of a doorway and raises a hand while saying something that can’t be heard on the video. He withdraws into the doorway and then emerges a few seconds later wearing red shorts with white stars and no shirt and with both hands in the air. He then puts his hands behind his head and walks out of the apartment where he again raises both hands.

Best known for his roles in Spike Lee films, Byrd was found dead around 1:45 a.m. on Oct. 3 near his home in southwest Atlanta. He had been shot multiple times in the back. A $10,000 reward had been offered for information leading to an arrest.

Byrd acted in films including “Clockers,” “Chi-Raq,” “Bamboozled,” “He Got Game” and “Da Sweet Blood of Jesus.” Also a stage actor, Byrd was nominated in 2003 for a Tony award for his performance in the Broadway revival of “Ma Rainey’s Black Bottom,” co-starring Whoopi Goldberg and Charles S. Dutton.