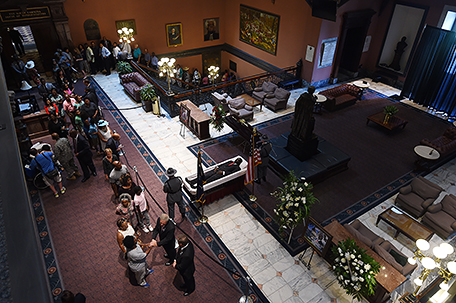 ABOVE PHOTO:  South Carolina Highway Patrol honor guard stand over Sen. Clementa Pinckney’s body as members of the public file past in the Statehouse, Wednesday, June 24, 2015, in Columbia, S.C. President Barack Obama was scheduled to deliver the eulogy at Pinckney’s funeral Friday morning at the College of Charleston.  (AP Photo/Rainier Ehrhardt)

COLUMBIA, S.C.  — The Confederate flag flew high Wednesday outside the South Carolina Statehouse, but a large drape kept mourners from seeing it as they filed past the open casket of a veteran black lawmaker and pastor.

The slayings of state Sen. Clementa Pinckney and eight others inside their historic black church is prompting national soul-searching over historic but divisive symbols. The makeshift drape obscuring the secessionist battle flag only emphasized how quickly this symbol of Southern pride has fallen into official disrepute.

Alabama Gov. Robert Bentley became the first southern governor to use his executive power to remove Confederate banners, as four flags with secessionist symbols were taken down Wednesday from a large monument to rebel soldiers outside that state’s capitol.

“It has become a distraction all over the country right now,” Bentley said. The iconic Confederate battle flag in particular “is offensive to some people because unfortunately, it’s like the swastika; some people have adopted that as part of their hate-filled groups.”

In South Carolina, making any changes to “heritage” symbols requires a two-thirds supermajority of both houses of the state legislature, and while lawmakers voted overwhelmingly for a debate later this summer, few wanted to risk ugly words during a week of funerals.

Pinckney’s open coffin was brought to the Statehouse in a horse-drawn carriage and displayed under the dome. He’s the first African-American given such an honor since at least Reconstruction.

The 41-year-old lead pastor of Emanuel African Methodist Episcopal Church served the state for nearly 20 years and spent a lot of time in the second-floor lobby, where mourners were greeted by five state senators and two former governors, as well as his wife and two young daughters. Pinckney came to the Statehouse as a page, and in 1997 became the youngest member elected to the House. He became a senator in 2001.

To honor him, people had to file past a statue of former Vice President John C. Calhoun, who argued in the 1820s and 1830s that slavery was a “positive good,” and that states should be able to decide not to follow federal laws they don’t like.

Prodded by Gov. Nikki Haley’s call to move the flag to a museum, South Carolina’s lawmakers overwhelmingly agreed to revisit an uneasy compromise that has held for 15 years, since mass protests succeeded in moving the flag from atop the dome to its current spot out front.

A growing number of politicians have since called for removing Civil War-era symbols, from state flags to license plates to statues and place names.

Many said change is imperative after seeing photos of shooting suspect Dylann Storm Roof, a 21-year-old white man, posing with the Confederate flag and burning and desecrating the U.S. flag. Now jailed on murder and gun charges, Roof was captured after a motorist spotted his Confederate license plate.

Even the Citadel, South Carolina influential military college, whose cadets fired the first shots of the Civil War, voted in favor of moving its Confederate Naval Jack flag from its prominent place inside its main chapel to a more “appropriate” campus location.

As with any other historic symbol in the state, even that move will require state lawmakers to amend the same Heritage Act that has kept the Confederate battle flag flying high even as U.S. and state flags were lowered to half-staff.

Four former South Carolina governors applauded Haley on Wednesday. Signed by Ernest “Fritz” Hollings, Dick Riley, David Beasley and Jim Hodges, their statement says the slayings “have reminded us of the important bond we share as South Carolina citizens. We should fly only the United States and South Carolina flags on our Statehouse grounds – flags that represent us all.”

“This is an extraordinary opportunity for South Carolina to be the beacon on the hill – to show love and not vengeance, to show unity and not division,” said Beasley, who was voted out of office in 1998 after advocating for its removal.

Other conservative Republicans around the South were sharing these sentiments Wednesday. U.S. Senator Roger Wicker said Mississippi’s flag, which has incorporated the Confederate symbol since Reconstruction, “should be put in a museum and replaced by one that is more unifying.”

Businesses including Wal-Mart, e-Bay, Amazon, Target and Sears said they are removing Confederate merchandise from stores and online sites, and at least three major flag makers said they will no longer manufacture the rebel battle flag.

For many, these changes can’t happen quickly enough. For many others, it’s all too fast.

Confederate symbols appear all over the South, from statehouses to courthouses to schools and streets and parks.

Already, a growing number of statues in multiple states have been defaced by graffiti. The words “Black Lives Matter” were spray-painted Wednesday on a century-old Confederate memorial in St. Louis, not far from Ferguson, Missouri, where the phrase took root last August, after an unarmed black man was killed by a white police officer. In Charleston, the words “racist” and “slavery” were painted Tuesday on a monument to Calhoun, just a block from where the Emanuel AME church stands on Calhoun Street.

These symbols are under attack by a “wave of political correctness” that is vilifying Southern culture, complained Ben Jones, the actor who played Cooter on the TV series “Dukes of Hazzard.” He said Confederate items will never be removed from the Cooter’s Place stores he owns in Tennessee and Virginia.

The few South Carolina lawmakers openly defending the flag include Republican Jonathon Hill, a freshman representative who said it belongs where it is, above a monument to fallen Confederate soldiers. He also said dealing with the issue now is disrespectful to the victims’ families.

“Dylann Roof wanted a race war, and I think this has a potential to start one in the sense that it’s a very divisive issue,” Hill said. “I think it could very well get ugly.”

But as relatives made funeral arrangements, some said they’re glad to see South Carolina and other states taking action.

“We appreciate the efforts of the state to remove the flag,” said Alana Simmons, whose grandfather, the Rev. Daniel Simmons Sr., was among the dead.

Other viewings and funerals for the nine victims are scheduled through Monday. President Barack Obama plans to memorialize the victims Friday morning during Pinckney’s funeral at the College of Charleston.

Urban League launches “One Nation, One Flag” campaign in support of effort to remove confederate flag

NEW YORK–The National Urban League and its South Carolina affiliates today launched the “One Nation, One Flag” campaign in support of South Carolina legislators’ efforts to end public displays of the Confederate Flag, and promote unity around the United States Flag.

“It’s a complex process that forms a violently racist heart and compels it to slaughter innocent men and women,” said Marc H. Morial, President and CEO of the National Urban League. “But public sanction of the symbols of division and hatred does not create an atmosphere of reconciliation. It’s time for the flag to come down.”

“One Nation, One Flag,” is an effort to have the Confederate flag removed from all public spaces, particularly from the grounds of the South Carolina State Capitol, and to promote the U.S. flag as a symbol of unity, tolerance and justice.  The campaign has adopted the social media hashtag #OneNationOneFlag, as a companion to #TakeItDownSC, and asks supporters to sign the petition at IAmEmpowered.com.

“In the wake of the racism-fueled massacre of nine innocents at Mother Emmanuel, the sight of the Confederate flag is salt in our wounds,” Charleston Trident Urban League President and CEO Otha Meadows said. “Our focus now should be on healing and unity.”

Like other organizations, the Urban League Movement has upheld a convention boycott of South Carolina over the issue of the flag.  Morial and the affiliate CEOs pledged to bring a national meeting to the state after the flag is removed from state capitol grounds.

“The hollow argument that display of the flag carries no racial animosity is belied by the fact that it was raised over the capitol in 1962, in direct response to the Civil Rights Movement and desegregation,” said James T. McLawhorn, Jr., President and CEO of the Columbia Urban League.   McLawhorn, along with other civic and community leaders, has been at the forefront of the movement to remove the flag for the last 15 years. “If we are truly to put those dark days behind us, we must put that flag behind us as well.”